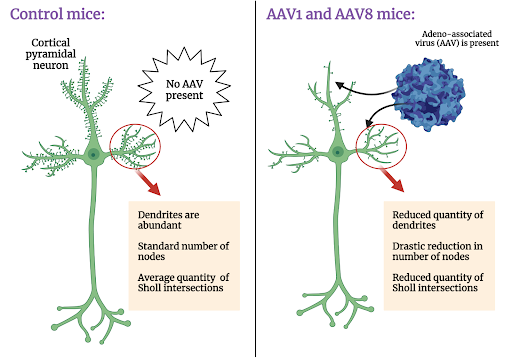 Adeno-associated viruses (AAVs) are some of the most widely used recombinant viral technologies—those that combine different genes to produce unique viral vectors, or tools that convey genetic material into cells—in modern neuroscience. Because they are incapable of being replicated within cells, recombinant AAVs are commonly used in neuroscience research as a means of expressing genes in specific cells. By expressing genes that heighten or dampen the function of certain cells, researchers are able to identify the functions of particular neural circuits.1  This approach can provide scientists with insight into the mechanisms underlying neurobiological processes. To make such circuit-related discoveries, AAVs are typically injected into certain brain regions of animal subjects. After an incubation period, some AAVs encoding fluorescent tracers can induce cells to fluoresce under specialized microscopes, enabling scientists to visualize particular neural circuitry. Furthermore, AAVs have demonstrated clinical potential; for example, AAVs have been used to replenish certain proteins in the treatment of diseases like congenital blindness 2, 3 and spinal muscular atrophy.4, 5 AAV is also currently being investigated as a potential means of treating other brain disorders, including Parkinson’s disease, Alzheimer’s disease, amyotrophic lateral sclerosis (ALS), and more.6

Despite all of the touted benefits of AAV as a recombinant viral technology useful to both research purposes and clinical progress, concerns have arisen about possible unintended effects of AAVs on the nervous system. In particular, the introduction of AAVs into the nervous system has been documented to coincide with a surge of immune responses. These responses include the upregulation of immune proteins whose activation and expression have been proposed to induce neuroinflammation. For instance, emergent evidence suggests that applying AAV to the retina and the hippocampus can lead to inflammatory cytokine upregulation and cell death.7 8

To empirically examine the possibility that AAVs may exert unintended effects on neuronal morphology, postdoctoral scholar Dr. Christos Suriano and colleagues, led by Dr. Lisa Boulanger of the Princeton Neuroscience Institute and the Department of Molecular Biology at Princeton, performed a series of experiments using variations of AAV and neuronal imaging techniques. Specifically, they investigated the effects that experimentally-relevant amounts of AAV exert on the morphology and functionality of dendrites, the branch-like appendages on neurons that receive communication signals from other neurons.

Firstly, to determine if AAVs impact neuronal structure, Suriano et al. injected AAV into various brain regions in mice and visualized the structure of neurons in these regions three weeks post-injection. The researchers used two different types of AAV in these experiments: AAV8-hSyn-mCherry (from now on referred to as AAV8) and AAV1-pCAG-FLEX-EGFP (from now on referred to as AAV1). This specific AAV8 induces cells to express vibrant red fluorescent markers, whereas this AAV1 is incapable of promoting fluorescence on its own. AAV1 also differs from AAV8 in several other ways: both possess different capsids, different promoters, and were created at different production facilities (AAV8 was created at Princeton, whereas AAV1 was developed at the Penn Vector Core). Capsids are the external shell-like layer of AAVs that encapsulate the viruses’ genetic material. Promoters are DNA sequences that proteins bind to in order to initiate gene transcription. Suriano et al. employed two distinct types of AAV to determine whether the unique features of each AAV could potentially contribute to the neurotoxic effects of AAVs.

In initial experiments, Suriano et al. found that, relative to the control mice that had not received injections of AAV8 and AAV1, those that received the AAVs had reduced dendritic length and fewer Sholl intersections (a quantitative measurement of dendritic complexity). The morphological outcomes of this experiment were striking due to the nature of AAV1 transgene expression. Adequate expression of the AAV1 virus used in these experiments is considered “Cre-dependent”, meaning that in order for this particular AAV1 to express detectable amounts of the fluorescent tracer, EGFP (enhanced green fluorescent protein), ample quantities of Cre protein must be present within the injected environment. In this experiment, Cre was not injected, so EGFP expression should not be discernible. However, despite not being able to detect EGFP expression, the dendritic length and Sholl intersections of neurons were nevertheless reduced relative to those of control mice.

Moreover, to distinguish between whether AAV administration completely eliminates or merely shortens dendrites, Suriano et al. counted the number of nodes (points from which dendrites branch out from the cell body) for each neuron. Nodes remain intact when dendrites experience only a decrease in length, whereas they disappear when dendrites are eliminated. Node counts revealed that the numbers of nodes were drastically reduced in mice injected with both AAV1 and AAV8 relative to control mice. This finding supports the theory that dendritic branches are not merely shortened in length, but outright eliminated.

Conscious of the fact that high doses of AAV are necessary for sufficient transgene expression, but also that these high doses can often promote neurotoxicity, Suriano et al. next wanted to determine how the magnitude of the AAV dose administered would impact the morphology of dendrites. They applied a quantity of AAV1 significantly smaller than that which would be sufficient to induce transgene expression in the same brain regions as before. As anticipated, no transgene expression was detected; however, at this lower dose of AAV, dendritic complexity was preserved. This finding provides evidence that the larger, more clinically and experimentally relevant doses of AAV1 are considerably more likely to disrupt dendritic complexity, while smaller doses of AAV may maintain the fundamental morphology of dendrites, but do so at the expense of detectable transgene expression.

Armed with their findings that high doses of AAV result in reduced dendritic complexity in the form of reduced dendritic trees, Sholl intersections, and nodes, Suriano et al. set their sights on understanding how these morphological changes might influence synaptic transmission (the way in which neurons communicate with each other). Because the elimination of dendrites results in less space over which neuronal communication can occur, they hypothesized that synaptic transmission might be altered following dendritic elimination. To examine this, the researchers measured the strength of synaptic transmission after AAV1 injection via the frequency and amplitude of mini excitatory postsynaptic currents (mEPSCs). mEPSCs represent the excitatory postsynaptic waves of activity that occur in response to neurotransmitter release from presynaptic neurons.

Their recordings revealed that not only were the mEPSCs produced after AAV1 expression greatly reduced in terms of both frequency and amplitude, but also that the time duration of mEPSC activity rise and decline was increased relative to those in the untreated mice. The decrease in synaptic transmission could not be attributed to the tinier amplitudes and reduced dendritic lengths alone, according to the researchers; rather, they speculated that the reduced efficiency of synaptic transmission was a byproduct of increased calcium ion influx through AMPA receptors. AMPA receptors—glutamate receptors that facilitate rapid synaptic transmission—are normally not permeable to calcium ions. Specifically, it is GluA2 subunits that typically prevent calcium ions from passing through AMPA receptors. The researchers hypothesized that the neurotoxic effects of AAVs potentially decrease the amount of GluA2 subunits, resulting in more calcium passing through AMPA receptors. In order to determine the proportion of the total current accounted for by calcium influx, the researchers applied an inhibitory toxin that exclusively impedes the activity of GluA2-containing AMPA receptors. They observed that spontaneous mEPSCs were significantly blocked in AAV-injected mice. These findings suggest that AMPA receptors permeable to calcium convey substantially more current after AAV injection relative to those in control mice, potentially due to the dwindling supply of GluA2 subunits caused by the neurotoxic effects of AAVs.

To further validate this finding, Suriano et al. measured the relative quantities of GluA1 and GluA2 in the mice. They found that GluA2 levels were diminished in AAV-injected mice, so much so that that GluA2 levels were comparatively negligible relative to GluA1 abundance in these mice. These findings are consistent with the idea that a reduction in GluA2 subunits permits greater permeability of calcium ions through AMPA receptors and demonstrate that AAV can distort the structural features of AMPA receptors. Taken as a whole, these findings indicate AAV administration not only results in the loss of dendritic trees, but also the deterioration of synaptic transmission.

As previously mentioned, infusion of AAVs into the nervous system environment can spur upregulation of certain immune molecules that can promote the neurotoxicity and associated deformations in dendritic trees discussed so far. Therefore, Suriano et al. next set out to establish whether AAV injection influences the transcription of immune genes known to regulate dendritic morphology. They injected AAV8 into a number of brain regions and waited four days before quantifying mRNA levels of the immune genes. As anticipated, they discovered these immune genes were upregulated in AAV-injected mice relative to control mice, bolstering the hypothesis that AAV infusion can promote immune responses that result in neurotoxic changes to dendrites and decreased synaptic transmission between neurons.

To more precisely pinpoint the immune mechanisms that orchestrate dendritic reduction, the researchers singled out toll-like immunoreceptor 9 (TLR9). This immunoreceptor is known to be activated by contact with short, recurring elements of DNA known as CpG motifs. These CpG motifs are universally found in AAVs. Once activated, TLR9s initiate signaling that increases the proliferation of multiple immune proteins and cytokines that, in turn, can disrupt  nervous system equilibrium. Thus, the researchers wondered whether inhibiting TLR9 would impair the upregulation of immune proteins and release of cytokines. In fact, inhibition of TLR9 virtually eliminated the decreases in dendritic complexity typically associated with AAV administration, resulting in neurons more or less indistinguishable from those in control mice. To add a cherry on top to this promising finding, Suriano et al. cited other studies in which the inhibition of TLR9 did not undermine transgene expression; in fact, experimentally-relevant doses of AAV can be injected seamlessly into different brain regions and may even lead to increased transgene expression under conditions in which TLR9 is inhibited. Thus, Suriano et al. demonstrated that TLR9 inhibition can mitigate AAV-associated neurotoxicity and may not impair the experimental and/or clinical efficacy of AAVs.

Overall, AAVs continue to be popular in both experimental and clinical settings–used to enhance neuroscientific understanding of intricate circuits and, ultimately, to treat acute neurological disorders. Notwithstanding the potential that AAVs have for yielding new neuroscientific insights, AAV-mediated gene delivery can instigate negative immune responses that reduce the complexity of dendrites and undermine the efficacy of synaptic transmission. However, Suriano et al.’s study has outlined several methods of mitigating the neurotoxic effects of AAV: reducing the viral dose of AAV (with the downside being that it minimizes transgene expression, thus overwhelmingly reducing the AAV’s experimental and clinical usefulness) and applying a TLR9 antagonist to stifle the activation of immune molecules upon AAV introduction. Though future studies are needed to  further evaluate the effectiveness of these methods, this work opens the door to wider adoption of this versatile and powerful tool for neuroscientific research and clinical treatments.

Dr. Suriano explained, “In the future, we plan to work out the specific mechanisms of how the immune response to adeno-associated virus simplifies dendritic arbors in neurons. In addition, we will also find new ways to minimize AAV-induced disruptions to neuronal homeostasis.” He also noted that these experiments would not have been possible without “the help of Dr. Esteban Engel and the Princeton Neuroscience Institute Viral Core Facility.”

The original article discussed here was posted as a preprint on bioRxiv on September 30, 2021. Please follow this link to view the full version.