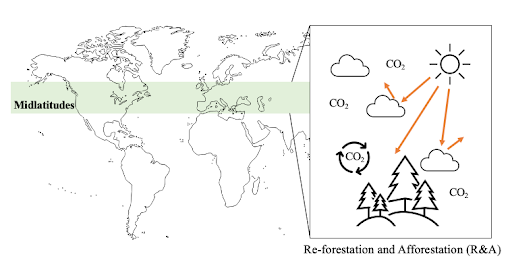 Carbon dioxide is a greenhouse gas, which absorbs and radiates heat. It is estimated to be responsible for about two-thirds of the total energy imbalance which is driving our increasingly urgent global climate crisis. According to the National Oceanic and Atmospheric Administration, this past year, we reached a new all-time-high of atmospheric carbon dioxide: an astounding 412.5 parts per million (ppm). This is higher than any other time in the past 800,000 years.

To combat the climate crisis, one solution is to remove carbon from the atmosphere. However, removing carbon from our atmosphere is easier said than done. The earth has natural “carbon sinks,” like forests, which trap and sequester carbon dioxide, mitigating the negative impacts of carbon emissions. However, carbon dioxide levels are increasing so rapidly that our forests cannot keep up. Recent efforts have focused on reforestation and afforestation as potential natural climate solutions. Reforestation is the intentional re-planting of trees in a forest where the number of trees has been declining, due to lumber harvesting or fire destruction. Afforestation is the planting of trees in a new area where there was no forest before. These efforts, in theory, would increase the prevalence of natural carbon sinks thus helping to sequester more carbon from the atmosphere. In reality, how viable this option is depends on a multitude of complex factors. Princeton University researchers, led by graduate student Sara Cerasoli of Amilcare Porporato’s group, highlight this question in their recent publication.

Creating forests, or re-densifying forests, increases carbon capture potential. However, it also creates a canopy covering the ground beneath it. At high latitudes, this can disrupt albedo, or snow’s ability to reflect radiation away from the planet, which in turn would have an overall warming effect. On the other hand, reforestation and afforestation (R&A) has proven to have a net positive cooling effect in more tropical regions.

For regions in midlatitudes, there is debate among scientists about whether R&A would actually have a positive effect. Confounding factors arise from the complexity of variable types of vegetation cover and how each type controls the organization of available energy in relation to atmospheric moisture and cloud formation. While forests lower overall ground albedo, they are efficient in exchanging heat with the atmosphere--which could lead to a net positive cooling effect in mid-latitudinal regions. However, it is important to realize that the exchange of energy between forests and the atmosphere does not reduce the overall amount of radiative heat. The significance of the energy transfer between forests and clouds arises through an increase in atmospheric turbulence, or the mixing of warm air from the ground and cool air from the clouds. This turbulence alters cloud dynamics and can increase albedo near the top of the atmosphere (TOA) which results in what is known as radiative or thermal cooling: the process of losing heat via electromagnetic radiation. It has been observed that cloudy regions, like the Amazon rainforest, have significantly higher TOA albedo and can therefore reflect thermal energy away from the planet and potentially result in a net cooling effect.

In addition, cloud coverage over naturally biodiverse areas of vegetation results in contrasting effects that are challenging to quantify. These inherent complexities of cloud dynamics in midlatitudes make it difficult to accurately model R&A effects even using the most sophisticated earth system models. In collaboration with Jun Yin from Nanjing University of Information Science and Technology, Princeton University scientists Cerasoli and Porporato approach this challenge from a unique angle, using remote sensing data and atmospheric boundary layer (ABL) modeling of cloud formation. To reduce confounding cloud feedback of R&A, they focus on studying various terrains such as forests with low land albedo and shrub, savannas and grasslands (SSG) with high land albedo, all at the same latitude.

Land cover data were obtained from MODIS Land Cover Climate Modeling Grid Product (MCD12C1) and cloud mapping data were obtained from Clouds and the Earth’s Radiant Energy System (CERES). In a visual overlay of the data, an initial analysis shows a strong correlation between forests and increased cloud cover (Figure 1). This demonstrates forests’ ability to reflect extra radiation through TOA albedo and mitigate the impacts of lower land albedo. To quantify these effects and determine if this results in a net positive cooling effect of R&A at midlatitudes, the data were subject to more rigorous statistical analyses. They found that long-term cloud coverage fractions over forests are larger than those over the SSGs, with greater statistical significance in mid-latitudinal regions compared to lower and higher latitudes.

First, to model combined cloud and albedo effects, the authors compared TOA radiative flux (irradiance) over midlatitude regions of interest. Near the equator, net irradiance over forests is larger than over the SSGs, predicting a potential warming effect of R&A. On the other hand, at midlatitudes, net irradiance from the SSGs is greater than that of forests. This suggests that the TOA albedo from forest-accompanied cloud coverage completely counterbalances (and surpasses) the loss of ground albedo due to forest canopy and supports R&A as having a net cooling effect in these regions.

Cerasoli et al. then probed the correlation between forests and increased cloud coverage with an ABL model coupled with a soil-foliage system. This model describes the relationship of plant response to both atmospheric changes and soil/water availability. Given a region of particular vegetation cover, i.e. a forest or SSG, particular atmospheric effects, like cloud formation, can be predicted. Cloud onset is assumed to occur when ABL height intersects with a rising condensation level. In other words, ground surface heating causes a rise in air particles, pushing them to cooler atmospheric regions where they condense until 100% humidity is reached and clouds form. Different vegetation covers absorb heat dissimilarly, which affects ground heating and condensation levels, thus influencing cloud formation.

Modeling results show that afternoon cloud formation is reached earlier in the day over forests than in SSGs. This can be explained by the greater prevalence of ground heating and transpiration in forested areas (Figure 2). Forests absorb more radiation (due to the lower ground albedo) and transpire, or release water, more than SSGs, which ultimately results in higher heat fluxes. Ground heating causes warm air particles to rise which then begin to cool and become less capable of holding the extra transpired water vapor. This allows the ABL to be pushed across the condensation level earlier and promotes earlier cloud formation. Greater cloud density over forested regions contributes to TOA albedo and deflects heat away from the planet.

Cloud coverage, once fully developed, does not significantly change throughout the remainder of a day (in both forests and SSGs); so for simplicity, the researchers assumed that cloud fraction remains constant after their formation each day. This allows them to focus on the radiative effect of earlier cloud onset observed in forested regions. Since forests promote earlier cloud formation, it can be assumed that they maintain cloud coverage for longer periods of time than SSGs or other less forested regions. In response to earlier cloud formation, the model shows that radiative flux reaches a minimum (cooling effect) between 35 and 40 degrees latitude, which is in agreement with the higher net cloud coverage fraction observed in mid-latitudinal forests. This delicate balance between an initial increase in radiative flux due to forests’ absorption of heat and the resulting net decrease in radiative flux due to cloud albedo effect illustrates the complex interplay between forests and atmosphere dynamics probed by the modeling done by Cerasoli and colleagues.

The radiative effects of increased carbon sequestration due to R&A can be added to the cloud dynamics model to evaluate and predict the overall net radiative impact. The difference in carbon storage capacity between SSGs and forests was calculated using carbon biomass data from Harmonized Global Maps of Above and Belowground Biomass. The updated model incorporating cloud feedback predicts significant carbon sequestration potential and net cooling effects of R&A in midlatitude regions (especially within 35 to 40 degrees latitude). The cooling impact of forest cloud coverage drives an increase in carbon storage potential from the baseline gain in biomass. This work suggests great benefit to utilizing R&A efforts in geographical regions whose potential to provide net cooling was previously uncertain.

The viability of global R&A can be assessed with greater confidence as a result of the work done by Cerasoli, Yin, and Porporato. Their model ultimately allows climate scientists to make well-informed decisions regarding the usage of natural climate control methods, such as R&A, to give us a greater chance of effectively mitigating the impacts of climate change.

In terms of future plans, second author Jun Yin says, "We want to explore the impacts of R&A size on the cloud cooling effects. We also plan to examine the dryland agroecosystems, where the R&A may be impractical, but drought-tolerance vegetation can be used for sequestering carbon".

This original article was published in Proceedings of the National Academy of Sciences on August 17, 2021. Please follow this link to view the full version.