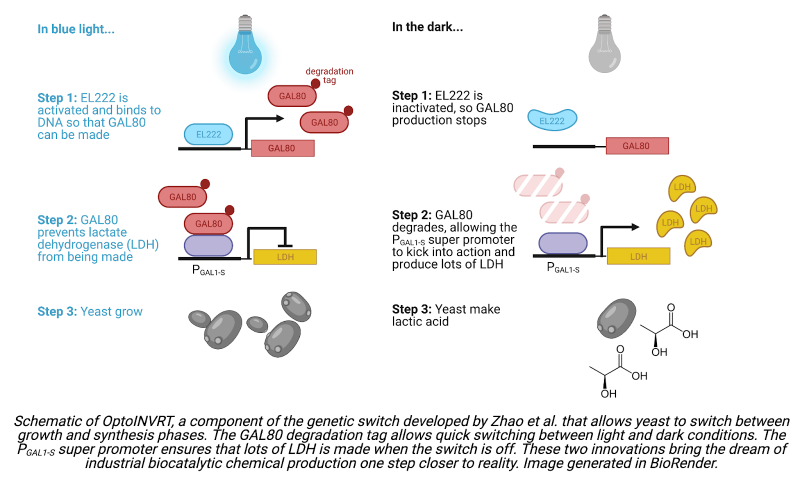 Many household goods, from dyes and plastics to contact lenses and aspirin, are made using petroleum byproducts. Over the past 150 years, chemical catalysts have been optimized to efficiently convert crude oil into starting materials for a wide range of products. Unfortunately, petroleum is a non-renewable resource, and emissions from petroleum processing are a big contributor to climate change. A team of bioengineers from the Avalos Lab at Princeton University is investigating an alternative: a petroleum-free way of manufacturing carbon-based goods that uses genetically engineered yeast to convert sugar into high-value products.

For thousands of years, yeast have been used as biocatalysts—catalysts that arose naturally over the course of evolution. Brewing is one of the oldest processes to use biocatalysts.  More recently, genetic engineering has broadened the range of yeast-catalyzed products to include biofuels, commodity chemicals, and pharmaceuticals. However, yeast are finicky, far more so than industrial chemical catalysts. While a chemical plant might shut down once a year to replenish its catalysts, yeast have to be monitored on a timescale of hours. Engineered yeast must divert sugars that would normally be metabolized for growth into the synthesis of artificial products. If a yeast cell spends too much time synthesizing product, though, it can no longer sustain its own energy needs and dies, which reduces the total amount of biocatalyst in the reactor. It’s a challenge to keep yeast healthy and growing while still maintaining their productivity.

Previously, the Avalos group addressed this challenge by designing a genetic switch—a group of genes that when introduced into a cell’s genome can switch on or off in response to an external stimulus. The team developed a pair of optogenetic circuits to control the switch. The first, OptoEXP, uses a light-sensitive molecule, EL222, to activate gene expression in the presence of blue light. The genes activated by EL222 allow yeast to grow unimpeded by chemical production. Conversely, in the dark when EL222 is inactive and the switch is off, yeast switch to chemical synthesis. By switching the yeast between growth and production phases, OptoEXP can be used to balance cell health and growth with chemical production.

Yeast can be engineered to produce a wide range of chemicals, but for the sake of their proof-of-concept study, the Avalos group chose to have the yeast synthesize either lactic acid, the product of one of the best-studied metabolic pathways, or isobutanol, an advanced biofuel. To create these two strains, they designed a second optogenetic circuit, OptoINVRT. The lactic acid OptoINVRT strain includes a gene that codes for lactate dehydrogenase (LDH), an enzyme required for lactic acid production. To prevent LDH from being expressed when blue light is present—the phase set aside for yeast growth—the team placed the LDH gene under the control of a transcriptional repressor, GAL80. They then placed the gene coding for GAL80 downstream of a promoter controlled by EL222. This circuit adheres to the following logic: in the presence of blue light, EL222 becomes activated and induces expression of GAL80. The presence of GAL80 prevents expression of LDH and thus prevents lactic acid production. Conversely, in the dark, EL222 becomes inactivated and GAL80 expression stops, allowing LDH to build up and lactic acid synthesis to proceed.

The group built an analogous OptoINVRT circuit for the isobutanol-producing strain. Implementing the two optogenetic circuits together, OptoEXP and OptoINVRT, created yeast with chemical production capabilities that could be turned on and off in response to light, resulting in the publication of a landmark paper. However, the strategy did not improve yields to the extent the Avalos group had hoped. Specifically, the genetic switch responded too slowly to be useful in large-scale chemical production. While the goal was to create a switch that could shift between yeast growth and chemical production rapidly, on the order of tens of minutes, this first-generation genetic switch took over 5 hours to initiate lactic acid production once blue light was removed. A switch this slow poses a problem if the goal is to control biocatalytic chemical production in real time. If an engineer notes that the concentration of yeast in a reactor has reached an optimal level for chemical production, they need to be able to induce chemical synthesis quickly. A delay of 5 hours could mean that by the time the yeast are ready to initiate synthesis, the yeast concentration may have already fallen to a sub-optimal level.

To overcome this problem, the team had to figure out why the genetic switch acted so slowly. Using computational models as a guide, they determined that the switch’s slowness was due to the high stability of the GAL80 repressor. GAL80 stuck around even once light was removed, delaying the synthesis of chemical product in the dark. To remove the delay, the team needed to shorten GAL80’s lifetime.

A common way to reduce a protein’s lifetime is to attach a degradation tag. However, previously designed degradation tags were either too strong or too weak to hit the GAL80 sweet spot. In the lactic acid strain, tags that were too weak resulted in too little LDH expression in the dark and thus delays in lactic acid synthesis. Tags that were too strong caused GAL80 to degrade so quickly that it failed to block gene expression in the light, causing yeast to synthesize LDH during times the yeast ought to have been focusing resources on growth. The team tinkered with known degradation tags, inserting mutations to engineer a tag that degraded GAL80 at the desired intermediate rate. They succeeded in developing a destabilized GAL80 that enabled yeast to switch from growth to production 6 times quicker than before: while the first-generation yeast strain took over 5 hours to initiate production upon the switch from light to dark, the new strain initiated production in less than an hour.

“Our moonshot with this technology,” says primary investigator Dr. José Avalos, “is achieving closed-loop control of metabolism using optogenetic actuators and genetically encoded biosensors, akin to how a thermostat controls temperature. To realize this, however, it will be necessary to systematically reduce or eliminate all delays in optogenetic actuators and biosensors that currently prevent this from being a reality.”

The new switch is also the team’s most versatile optogenetically controlled switch to date: gene expression downstream of the destabilized GAL80 is 130 times greater in the dark than in the light. While this is a big improvement over the first-generation switch, which only sports a 50-fold increase in gene expression between light and dark conditions, the new switch’s maximum gene expression rate was not able to outcompete the state-of-the-art promoter currently used in much of yeast metabolic engineering, PTEF1. The team set out to design a switch that could exceed this benchmark next.

Promoters are responsible for recruiting the protein machinery required for gene expression to the right piece of DNA. While some promoters are always on—termed constitutive promoters—others, termed inducible, can be turned on and off. Typically, constitutive promoters like PTEF1 are stronger than their inducible counterparts, but they have the drawback of being unable to turn off. Thus, if the genes expressed downstream of a promoter are harmful to yeast health, there is no way to turn the promoter off in order to allow yeast to grow back to the high numbers required for large-scale chemical production. The Avalos group aimed to design a yeast strain that could do both: turn chemical production on and off, as well as express genes at higher levels when turned on than even the best constitutive promoters.

The team’s approach was to mutate the promoter controlling the expression of the synthesis enzymes—LDH in the lactic acid strain—to make it stronger. By removing sequences that desensitized the promoter to natural regulatory cues, which normally instruct gene expression to decrease when sugar levels in the yeast media are high, and by adding additional sequences to alter the shape of the DNA at the promoter such that the proteins required for gene expression could bind to the promoter more easily and in greater number, they succeeded in building a “super” promoter that is 2.5 times stronger than PTEF1. This is an impressive feat, especially considering that PTEF1 is already one of the strongest promoters used in yeast metabolic engineering. When combined with the destabilized GAL80 repressor, the super promoter enabled the lactic acid strain to produce 53% more lactic acid than the first-generation strain, showing that fast genetic switches and strong promoters can greatly enhance optogenetically controlled biocatalytic chemical production.

When the super promoter and destabilized GAL80 repressor were introduced into an isobutanol strain, production of isobutanol also increased by 15%—not as large of an increase as in the lactic acid strain, but still significant. The team posits that the discrepancy between the two strains is due to differences between the lactic acid and isobutanol synthesis pathways: in addition to producing its chemical product, the lactic acid pathway is efficient at producing NAD+, a substance yeast need to function. Isobutanol synthesis is not as efficient at NAD+ production, which likely limited the team’s ability to control the strain.

In the future, the Avalos Lab would like to use similar strategies to more precisely control other biosynthetic pathways. As seen with the isobutanol strain, however, some synthetic pathways require more complex strategies than others to keep substances required for yeast function in balance. One pathway of particular interest is the flavonoid pathway. Flavonoids are molecules with human health benefits that are normally only found in small amounts in plants. They give color and aroma to flowers and are also found in fruits and vegetables. When consumed, flavonoids have anti-oxidative, anti-inflammatory, and anti-carcinogenic properties. Though synthesis of chemicals like flavonoids is more difficult to control than lactic acid synthesis, Dr. Evan Zhao, the paper’s lead author, remains unfazed.

“Ten years ago,” says Evan, “it looked like biocatalysts would never be able to compete economically with industrial chemical catalysts. Now, with recent advances like optogenetics, within the next 15-20 years I expect to see biology replacing chemistry in small molecule production, like we’re already starting to see in the perfume industry. Our work is an example other bioengineers can look to when designing promoters and genetic switches for their own applications.”

We already drink beverages brewed by yeast in small batches. Soon, we could see yeast put to work at an industrial scale, making the fuels, therapies, and materials we need.

This original article was published in ACS Synthetic Biology on November 24, 2020. Please follow this link to view the full version.