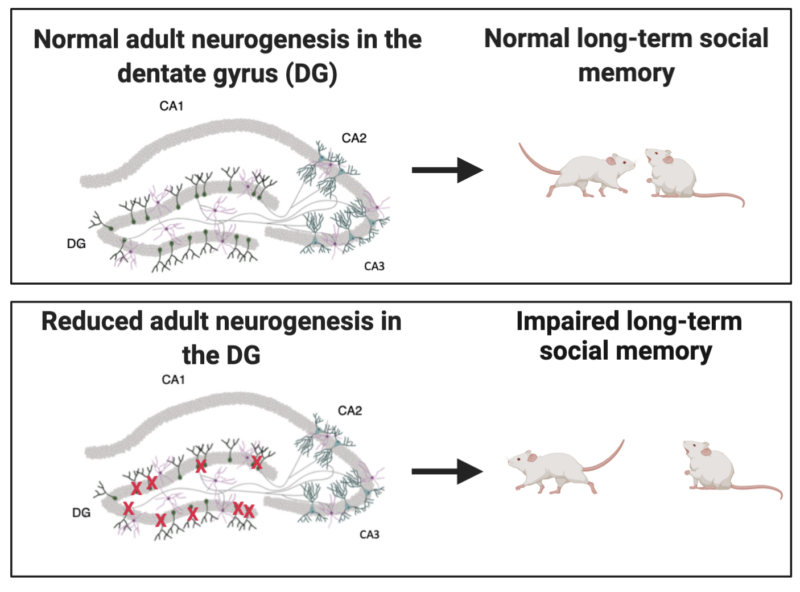 Previous work has implicated hippocampal subregion CA2 as necessary for social memory function (Hitti & Siegalbaum, 2014). When the CA2 region is lesioned, mice lose the ability to recognize familiar others. Yet little is known about the microcircuitry surrounding CA2 and how it might be involved in this phenomenon. It has recently been shown that adult-born neurons in a nearby subregion of the hippocampus called the dentate gyrus send excitatory projections to the CA2 region (Llorens-Martin, 2015). Importantly, this sub-population of neurons has been implicated in anxiety and stress regulation, as well as other social behaviors. However, little is known about the functional role of the projections from these adult-born granule cells in the dentate gyrus to the CA2 in social memory, specifically.

A recent paper, led by Dr. Elise Cope, a post-doctoral researcher in the lab of Dr. Elizabeth Gould in Princeton’s Department of Psychology, began to explore how adult neurogenesis--the process by which new neurons are formed throughout adulthood--in the dentate gyrus might be involved in social memory and social hierarchy formation. To address this question, Cope and colleagues performed a series of experiments using a genetically altered mouse (GFAP-TK) that allows for the inhibition of adult neurogenesis following 6 weeks of administration of an antiviral drug called valganciclovir (VGCV). After the full course of administration of VGCV, the team assessed social memory function using a common paradigm called the direct social interaction test. The social interaction test is a 3-trial behavior test in which an experimental mouse interacts with a novel mouse in trial 1, the same, now familiar mouse in trial 2, and then a new, novel mouse in trial 3. During these 5-minute trials, the sniffing behavior of the subject mouse is measured; mice are expected to spend more time sniffing a novel mouse and less time sniffing a familiar conspecific. Cope and colleagues hypothesized that reducing adult neurogenesis would cause the mice to spend equal amounts of time with novel and familiar mice, implying impaired recognition of the familiar mouse.

Cope et al. found that mice with reduced adult neurogenesis failed to recognize a familiar mouse when there was a long (24-hour) delay between trials 1 and 2, but maintained this ability when the delay was brief (30-minutes). This result was especially interesting because it allowed the researchers to begin to posit adult-born neurons’ specific role in social memory. Were these neurons involved in acquiring the new memory, maintaining an existing memory, or recalling a memory? Cope and the team’s discovery suggests that the new neurons are involved in maintaining and potentially retrieving memories over longer periods, since the mice were still able to acquire a memory as shown in the 30-minute delay trials.

This finding is a great start in beginning to understand the role of adult-born neurons in social behaviors. However, Cope and colleagues took this work one step further by investigating the role of these neurons in social dominance, a behavior that requires social memory. Based on the results from the social interaction test, Cope predicted that with impaired social recognition, these mice might have a hard time forming stable social hierarchies. Cope tested the same transgenic mice in a behavioral paradigm called the tube-test. This is a non-aggressive social dominance test, that allows researchers to assess the social hierarchy in a cage of mice. Briefly, two mice are placed nose-to-nose in the center of a cylindrical tube thin enough that they cannot turn around, and thus the only way out is to push out the other mouse or be pushed out by the other mouse. Mice that are higher in a social hierarchy tend to push other mice out, whereas mice lower in the hierarchy tend to be pushed out. The researchers were not able to determine stable hierarchies in many of the cages nor any observable differences in agonistic behaviors in the home cage. Notably, there were many confounds that may have prevented observable hierarchies in addition to the reduced neurogenesis in these mice; therefore, it may be premature to draw conclusions regarding the involvement of adult-born neurons in hierarchy formation specifically.

Cope et al.’s research supports the involvement of adult neurogenesis in social memory. Further, by manipulating the delay in the social interaction paradigm, this work dives even deeper into understanding exactly what role adult-born neurons play in social recognition. Cope and colleagues’ results extend previous findings concerning the involvement of social memory by revealing that these adult-born neurons are essential for the long-term maintenance of social memory.

Elise Cope, first author of the publication reviewed here and a postdoctoral researcher in Elizabeth Gould’s laboratory, explains that “while this study suggests a role for adult-born neurons on social behaviors, it doesn’t quite address the “how” question. I would love to explore this further by examining whether adult-born neurons influence social memory through their connections to the CA2 region [of the hippocampus].”

The original article was published in eNeuro on October 30, 2020. Please follow this link to view the full version.