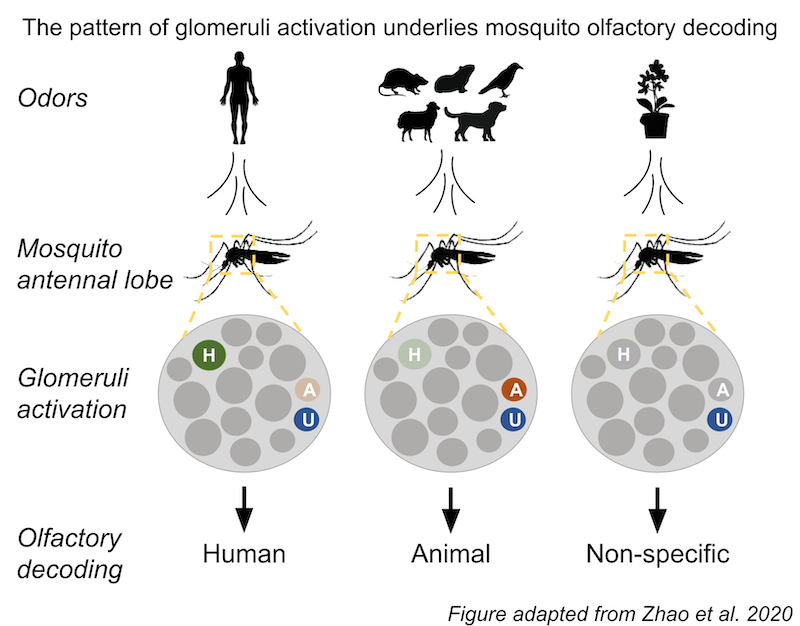 Some mosquitoes are picky eaters. For example, females of the mosquito subspecies Aedes aegypti preferentially select humans over non-human animals as their blood host (only females mosquitoes bite). The consequence of Ae. aegypti’s preference for humans is its emergence as a global driver for the spread of infectious diseases like dengue, yellow fever, and Zika. So what attracts this mosquito so strongly to humans? Your smell.

For Ae. aegypti to prefer humans over animals, it must discriminate between human and animal odors, which are composed of blends of tens to hundreds of different molecules. This is a remarkable sensory challenge. The “message” each scent conveys may depend not only on the chemical structure of each molecule but also the concentration and relative proportion of molecules to each other. Thus, the mosquito brain must distill complex and abundant chemical signals into simple cues: bite this, not that.

Recently, Princeton graduate student Zhilei Zhao and colleagues from the McBride lab sought to determine how Ae. aegypti robustly distinguishes human and animal odors. Toward this goal, Zhao et al. engineered mosquitoes whose neurons in the olfactory center of the brain, called the antennal lobe, fluoresce in response to the presentation of odor. The antennal lobe is composed of discrete functional units called glomeruli. Each glomerulus is connected to a dedicated receptor-type in the “nose” of the mosquito. Thus, the mosquito reporter system enabled the researchers not only to visualize which glomeruli are activated, but also how strongly, in response to specific odors.

To conduct their study, Zhao et al. collected odors from humans, various animals, as well as milkweed flowers and honey, all of which mosquitoes find attractive. The researchers collected the odors from each sample, individually administered them to mosquitoes, and then imaged the resulting activity of glomeruli in the antennal lobe of the mosquitoes. Comparison of glomeruli sensitivity pinpointed three glomeruli most active in response to each type of sample (human, animal, and nectar-related). The three glomeruli were classified as follows: first, Universal (U) was sensitive to human-, animal-, and nectar-derived odors; second, Human-sensitive (H) only responded robustly to human odors; finally, Animal-sensitive (A) was only sensitive to animal odors. Thus, surprisingly, the mechanism of host discrimination was much simpler than the researchers had initially anticipated; the activity elicited by these two or three glomeruli is sufficient to discriminate human and animal odors.

The next goal of McBride’s group was to identify the unique chemical signatures of human odors that selectively activate the H glomerulus. To accomplish this goal, they analyzed the chemical composition of human and animal odors. Remarkably, both odors are composed of nearly all the same chemical components; however, the relative proportions of the molecules that make up each odor vary significantly. This observation suggested that it is not the unique presence of a specific molecule in human and animal odors that underlies exclusive activation of the H glomerulus or the A glomerulus. Rather, it is the ratio of the chemical components that is characteristically human or characteristically animal.

The McBride lab’s findings pose a curious dilemma when it comes to understanding how Ae. aegpyti discriminates between human and animal hosts. As noted, animal odors contain the same chemical components as human odors, and thus, contain long-chain aldehydes. It is feasible that a mosquito may be exposed to a high dose of animal odors, and thereby a sufficiently high concentration of long-chain aldehyde molecules for detection by the H glomerulus. In this case, the mosquito’s host discrimination system could theoretically be “tricked” into concluding that it is detecting humans, not animals.

Concentrations of odors will fluctuate in natural settings, and the mosquito’s olfactory system must be able to reliably distinguish the identities of odors despite these fluctuating concentrations. To probe how this problem could be overcome, Zhao et al. employed a computational modeling approach to estimate the accuracy of host discrimination in response to various combinations of H, A, and U glomeruli stimulation. The key takeaway from their approach is that activity from a single glomerulus input is inaccurate when the odor concentrations vary widely. However, this accuracy is greatly improved when the activity of the H glomerulus is calibrated against the activity of U glomerulus. In other words, the activation in the U glomerulus is used as a proxy for total concentration. As a result, the dosage of long-chain aldehydes is normalized against the total concentration of odors to yield a relative concentration, enabling accurate discrimination of animal versus human. While this finding has not been verified in vivo, it provides a possible explanation for how mosquitoes manage sensory decoding in the face of variable concentrations of odors.

The results of this study identify principles governing odor discrimination that may be applicable beyond mosquitoes. Indeed, odor-driven behavior is prevalent across biology. Insect pollinators, like bees, butterflies, and moths, must discern floral scents to evoke foraging behavior [1,2]. Mammals, like many species of rodents, must detect and interpret odor cues for proper kin discrimination and regulation of parental care behaviors [3]. More generally, the ability to decode complex and variable input signals into simple outputs is a challenge faced across multiple domains of life. Even bacteria, in a process called quorum sensing, detect and decode blends of small molecules to coordinate group behaviors [4]. Beyond this study’s biological implications, determination of the mechanism underlying odor discrimination in Ae. aegypti, specifically, could be crucial for the development of novel treatments to control the spread of deadly diseases. Perhaps, chemical therapeutics that target the mosquito’s olfactory machinery could manipulate or inhibit Ae. aegypti’s picky preference for biting humans.

Zhilei Zhao, first author of the publication reviewed here and graduate student in the McBride lab, comments that, “without the resources at Princeton, this work is not possible or even conceivable. For example, the Bezos Center for Neural Circuit Dynamics at Princeton Neuroscience Institute helped us develop the powerful two-photon microscope that makes fast imaging of neural activity possible. This type of microscope is not commercially available yet, meaning you cannot really buy it on the market. So, it is really a unique resource we have here at Princeton.”

This original article was shared as a preprint on Biorxiv on November 2, 2020. Please follow this link to view the full version.