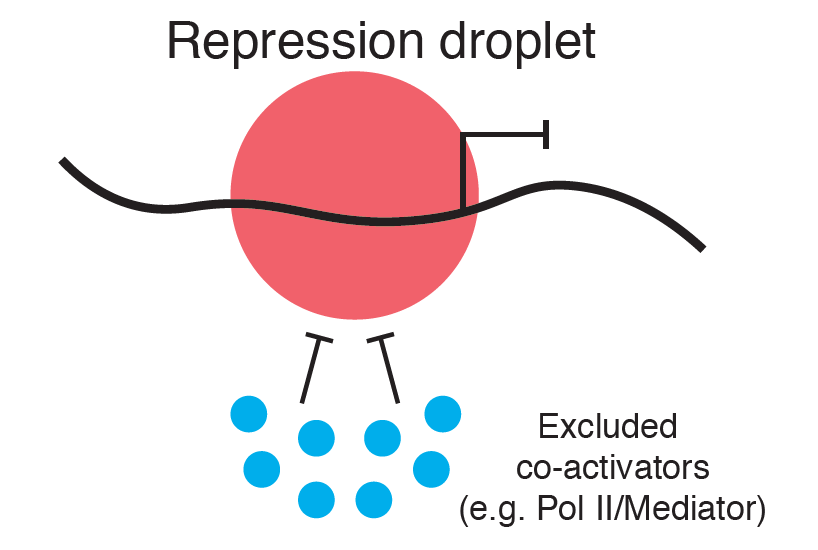 Since all complex animals evolved from a common ancestor, a set of shared “blueprints” control very similar developmental processes in all animals. One such master regulatory protein is the Groucho/TLE (Gro) family of transcriptional corepressors, which interacts with a variety of sequence-specific transcriptional repressors such as Hes/Hairy to regulate gene silencing. Highly conserved in all Bilateria animals (animals with bilateral symmetry), Hes and Gro work together to regulate a number of important developmental processes, from laying the groundwork for the segments of insect bodies to controlling the development of spinal cords in vertebrates.

The publication of an extremely controversial perspective in Cell by Richard Young and Nobel Laureate Phil Sharp from MIT in 2017 first popularized the possibility that many processes inside the nucleus are driven by phase separation-like properties. Over time, this has  led to a sea-change of thinking in the field of transcriptional control and the study of the nucleus. In their perspective, they laid out the possibility that transcriptional activation, a process that has been deeply studied for over a century, also could be explained using the biophysics of phase separation in liquid-like condensates. This initial hypothesis has since been followed by numerous high-profile publications in Cell (Boija et al., 2018), Science (Sabari et al., 2018), and Nature (Guo et al., 2019) from Young and Sharp’s research teams, all of which offer experimental evidence for exactly this type of behavior in proteins essential to the activation of gene expression. In addition to these publications, this epic shift in scientific thinking has been supported further by studies from other respected groups (Strom et al., 2017; Larson et al., 2017) showing that constitutive gene silencing, e.g., the formation of heterochromatin where genes are turned off indefinitely, also behaves in a manner consistent with the biophysics of phase separation.

First, the formation of these repression condensates depends heavily on cell division - indeed, they “dissolve” when cells undergo cell division, a phenomenon that has been previously underappreciated in the field of phase separation. When cells divide, chromatin condenses into classic mitotic chromosomes and the nuclear envelope dissolves. What happens to the liquid-like condensates during this process? Apparently, for protein condensates involved in transcriptional repression, they essentially “dissolve”. While the mechanism of how these condensates dissolve remains unclear, the process could be tied to post-translational modifications (phosphorylation) of proteins essential to phase separation. Though it has long been acknowledged that phosphorylation and other post-translational modifications of proteins are important regulators of cell division, the possibility that they might also lead to dissolution of condensates (enzyme factories important for transcriptional processes that only occur in times when the cell is not dividing) is a key insight in explaining the many functionalities of cells during division.

Treen and colleagues also describe the importance of protein-DNA binding to the dynamics of these repression condensates. When the part of the Hes protein that is critical to DNA binding was mutated, rendering the protein unable to bind DNA, the condensates that subsequently form from these mutant proteins are much larger and less dynamic than their wild-type counterparts. Importantly, the observed dynamic movement and size of repression condensates are important indicators of its function. Put another way, the nature of the formation of these types of condensates in cells is critical to their function as “enzymatic factories”, controlling the silencing of genes residing in the condensate.

To build upon these new observations about the phase separation and dissolution of condensates containing transcriptional repressors and corepressors, Dr. Treen will be focusing on the dynamic properties of these condensates as the cell undergoes growth and subsequent mitosis, and in response to cell signaling in general. “We know that transcriptional repressors form stable droplets within cells. But there are numerous examples where cell signaling can "derepress" genes. Trying to link these observations with the phenomenon of repressive droplet formation or dissolution by liquid-liquid phase separation is what I am working on right now.”

Towards a unifying model of cellular condensates

In the first part of our series, we described the important contributions regarding stress granules from the Brangwynne lab (Sanders et al., 2020). Beyond all else, Sanders et al. address the two common criticisms by skeptics of phase separation’s biological relevance:

Sanders et. al. attended to these points when they demonstrated that stress granules and P-bodies form via initial nucleation by unbound RNAs when the cell experiences stress, bound by specific high-valence proteins that are intrinsically drawn to these exposed RNAs. The sequestration of these RNAs by these proteins is essential to the ability of stress granules and P-bodies to serve their purpose as storage facilities for RNAs and ribosomes during a rainy day.

In their publication, Treen et al. also fill in blanks associated with these two critical points. Repression condensates form via the binding of transcription repressors to their target DNA motifs, which they suggest then act as nodes to nucleate corepressor interactions. These interactions ultimately lead to the formation of repressive condensates, through their interactions with other proteins is important for the silencing of gene activity. Crucially, the proper formation of these condensates is regulated by DNA binding itself, suggesting that the form informs the function.

So, do these publications finally lay the skeptics of phase separation, otherwise known as the “Great Bubble Theory”, to rest? All indications suggest the contrary. Many recent publications have surfaced, questioning the initially groundbreaking research from Sharp and colleagues on transcriptional activating condensates. Others have published contrary evidence on the phase separating properties of heterochromatin. Indeed, it is still an open question whether these intriguing observations will stand the test of time, let alone whether all cellular processes will abide by the law of lava lamps. Nevertheless, the possibility that life itself is controlled by the same basic principles that govern the immiscible liquids oil and water lends a rather yin/yang undertone to biological processes that will, doubtless, continue to drive fierce experimentation and debate in the decades to come.