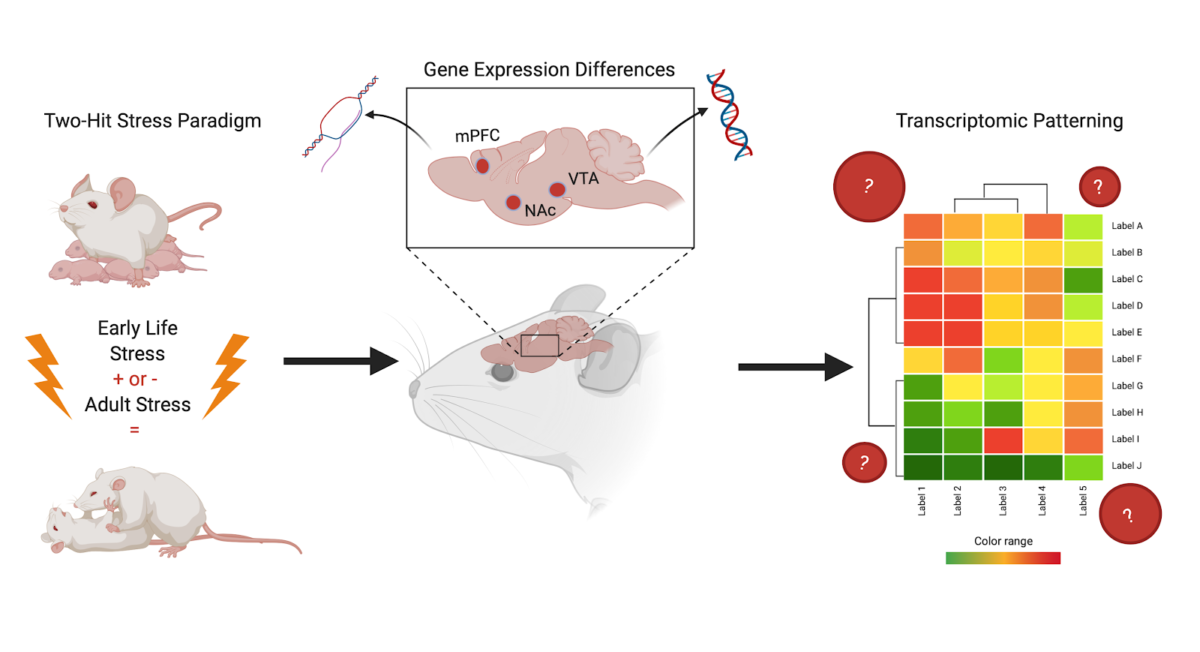 This study by Peña et al., entitled “Early life stress alters transcriptomic patterning across reward circuitry in male and female mice”, investigates how ELS affects the activity of transcription (the biological process that reads DNA into RNA) in three regions of the mouse brain. The key brain regions of interest are the ventral tegmental area (VTA), the nucleus accumbens (NAc), and the prefrontal cortex (PFC). These regions were chosen because they are part of the brain’s reward pathway—the same pathway that often is altered or functioning incorrectly in cases of depression and anxiety. In this review, transcriptional change and signature will mean the different and specific levels of gene expression giving rise to observable levels of messenger RNA (mRNA).

Through measuring levels of transcription, the key question this paper set out to answer was: in the brain regions of interest, are the transcriptional signatures in neuronal cells from mice who experience both ELS and adult stress different than those in mice who experience only one type of stress, i.e., either ELS or adult stress? The authors hypothesized that the answer would be yes, the transcriptional signature would be different.

Notably, this study included both male and female mice, which is of translational importance because girls and women are more likely to be diagnosed with depression and certain anxiety disorders. By including female mice, the authors were able to investigate whether there are differences in the effects of ELS on males and females.

To model ELS and subsequent exposure to adult stress in mice, Pena et al. used a “two-hit” stress model. The “two-hit” stress paradigm involves mice going through both early life and adult stress. The authors did this to compare the effects of (1) ELS alone, (2) adult stress alone, and (3) the two types (“hits”) of stress together, to a control group of mice to which no stress was given.

To answer this question, Peña et al. collected samples of the brain regions of interest from adult mice that underwent the three described types of stress as well as controls. They analyzed the gene expression in cells from stressed [by measuring log2 fold change (FC) from a control baseline] and found that they were indeed able to detect a unique transcriptional signature of stress sensitivity; and that this signature was the same for both males and females. Moreover, they determined that the transcriptional signature of cells from mice which underwent two hits of stress was distinct from that of mice who did not undergo any experimental stress or only one type of stress. This finding is exciting because now there is evidence for a biological mechanism for increased risk of developing a disorder in adulthood at the transcriptional level of the brain, providing a higher resolution of mechanistic influence. This is in addition to and supportive of the changes in behavior due to a history of ELS already observed by many in the field. This suggests that the impact of experiencing stress as an adult is dependent on the individual’s experience with ELS and the transcriptional changes it induces.

Peña et al. also reported that the two-hit stress paradigm was associated with enrichment of genes involved in neuronal plasticity in the PFC. A well-functioning plasticity mechanism for  critical periods (important developmental time periods) is extremely important for proper development, and the authors found that this mechanism was affected by ELS. Peña and colleagues also observed that the genes up- and down-regulated in the PFC were opposite for males and females. This means that if a gene was found to be up-regulated in females, it was found to be down-regulated in males, and vice versa. This led them to suggest that while males and females could exhibit similar transcriptional signatures for the response to stress given a history of ELS, the synaptic and transcriptional mechanisms used to get there could be sex-specific.

Overall, the authors concluded that the unique transcriptional patterns observed in the neurons of mice with a history of ELS alters the transcriptional development of the brain by priming the cells’ transcriptional regulation in response to future stress. While the causes of these regulatory mechanisms governing behavior have yet to be determined, don’t stress, Dr. Pena’s lab at Princeton is on it!

Dr. Catherine Pena is currently working on other projects to extend the work highlighted here by  looking at the epigenetic mechanisms that regulate these transcriptional changes. “We want to know how ELS interacts with development itself to induce such long-term sensitivity that we don't see when stress occurs at other points in the lifespan. We also want to extend this work by looking at transcriptional changes across the lifespan, and not just at a single snapshot in adulthood,” she explained.

The original article discussed here was published in Nature Communications on November 8, 2019. Please follow this link to view the full version.