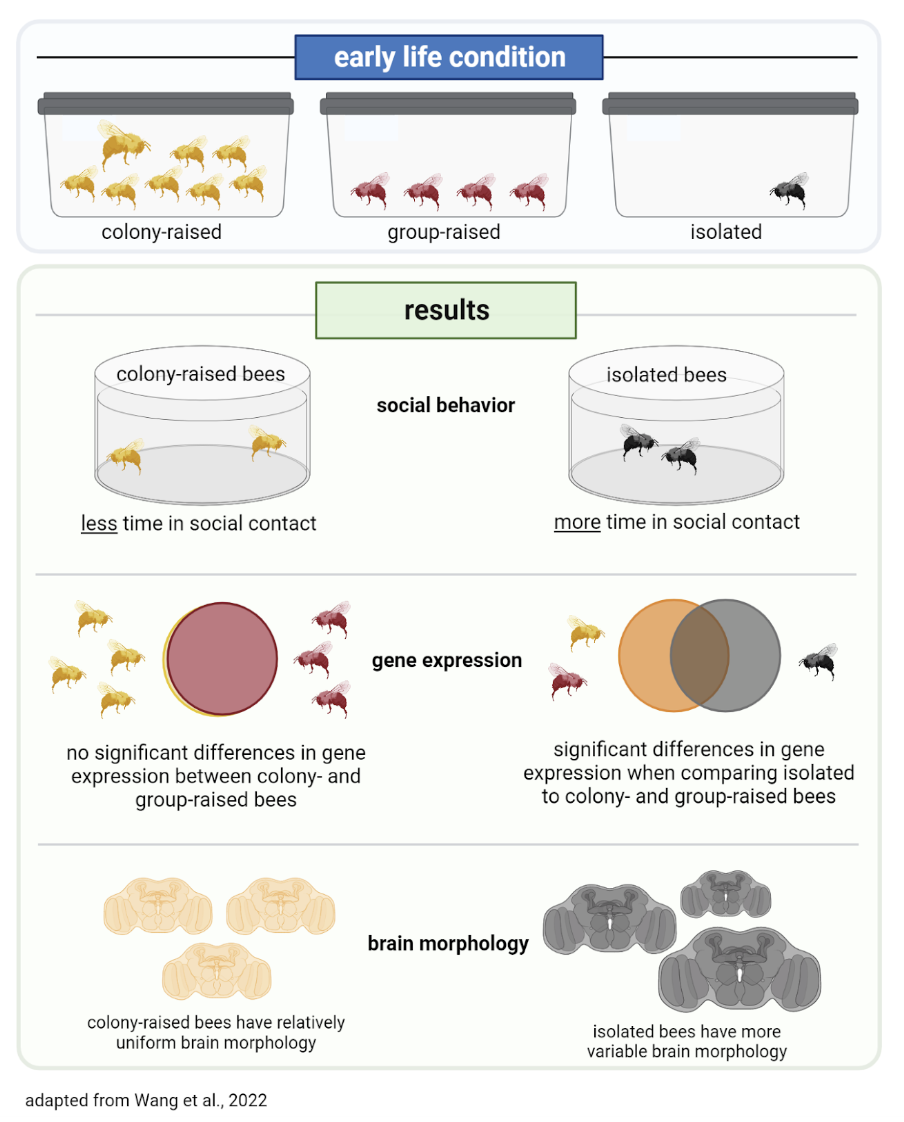 Throughout the COVID pandemic, many of us were faced with profound levels of social isolation which took a toll on both our mental and physical health. This has been especially detrimental for children, whose brains and social skills are still developing. Normally, social experience in early life plays a crucial role in guiding this development; but what happens when that guidance is no longer present? Disruptions to the early social environment have been seen to negatively impact other social species besides humans, such as mice, fish, and some insects. Studying how social isolation may disrupt the development of these highly social species can provide insight into the neural mechanisms underlying  both typical and aberrant behavior at a level of detail not currently possible in human subjects. Taking advantage of one of these highly social species, Dr. Yan Wang and colleagues in the departments of Ecology & Evolutionary Biology and the Center for Biophysics at Princeton used bumblebees to measure the effects of early life social isolation on behavior, gene expression, and whole-brain neuroanatomy.

Typically, bumblebees live in large, cooperative colonies with many workers and one queen bee. Within these colonies, there is an established division of labor that relies on the ability of individuals to discriminate between familiar and unfamiliar bees via chemical signals sensed through their antennae. Bees learn appropriate behaviors within this social structure from others in the colony early in life. To study the effect of disruption of the typical social structure found in a colony, Wang et al. raised bees just emerging from their cocoons in one of three conditions for 9 days: (1) colony-housed, representing the standard experience with the rest of the colony; (2) group-housed, four bees are raised together separately from the rest of the colony; and (3) isolated, one bee is housed in complete social isolation. Immediately following the 9th day, they utilized pose tracking software developed by researchers at Princeton (check out our review of this work and listen to our interview with the lead author to learn more) to observe the behavior of bees from all three groups during social interactions with just one other bee.

Wang and colleagues found that when a bee raised in isolation interacts with another bee raised in isolation, it spends more time close together with its partner than pairs of colony/colony or group/group raised bees. Further, when in close proximity to their partner, socially isolated bees spend more time in cooperative, prosocial behaviors and less time in locomotion-related behaviors compared to colony- and group-raised bees. Interestingly, the authors found that even though socially isolated bees were overall more interactive with a partner bee, they showed greater variance in their engagement in antennae-to-antennae behaviors (a way for insects to determine if the animal they are interacting with is a “friend or foe”). This finding suggests that socially isolated bees may have a decreased ability to use these close interactions to gain meaningful information about their social partner. Wang et al. were curious about what neurobiological mechanisms could be contributing to these behavioral changes they observed in socially isolated bees. Were the differences in behavior the researchers observed between bees raised in different social conditions reflected at the level of genes in the brain?

A set of genes expressed in the brain in a given condition can provide insight into how behavior is represented at the molecular level. When the authors compared gene expression levels between the colony-housed and group-housed bees, they found that no genes were differentially expressed between the two conditions. However, when they compared gene expression levels of each of these conditions to those of isolated bees, there were many genes whose expression was either significantly increased or decreased in isolated bees. Most of these differences were found between isolated bees and colony-housed bees. Importantly, the genes that contributed most significantly to the difference in expression profiles are known to be involved in the processes of social living. These results show a reflection of the behavioral changes following social isolation at the gene level.

The authors next set out to determine if there were differences in the global network of gene expression across the brain for bees raised in different conditions. This is important because understanding how the expression of an individual gene contributes to the global network can give insight into how something as seemingly minute as a gene can give rise to something as macroscopic as behavior or even brain size. Using bioinformatic techniques, Wang et al. developed a computational representation of how genes turn on and/or off together, called a co-expression network. With this computational representation, they found that whole-brain gene expression patterns in socially isolated bees were less likely to function cooperatively than in the other groups. This dysregulation translates to an overall blunted effect on functionality of the gene network in socially isolated bees. Given these effects of social isolation on gene expression within the bee brain, Wang et al. hypothesized that social isolation may also influence brain volume and morphology during development. To explore this hypothesis, they used cutting edge imaging reconstruction techniques to measure the size of all regions in the brain.

Collecting 3D images of the brain is technically challenging due to limitations on how deeply light can get into a solid structure. To get around this, Wang et al. collected images of individual brain slices and reconstructed them into a 3D volume of the entire brain. Across the brain, socially isolated bees showed significantly more variance in volume, while colony- and group-raised bees showed relative similarity.

Using a multidisciplinary approach, Wang and colleagues showed that isolated bees have higher variance in both social behavior and brain development compared to colony- and group-raised bees. They propose that this hints to a honing effect of early social environments that provide guidance for development towards optimized brain characteristics and social behavior. Social isolation may make an individual vulnerable to disorganization of these normal brain characteristics, which may then contribute to greater variance in behavior.

In our society, similar mechanisms of social experience guiding behavior development can be seen everywhere we look. For example, children learn how to share and work in groups through interactions with teachers and peers at school. When these experiences are entirely removed or heavily disrupted as in the case of COVID-19, proper behavioral development may not occur. Yet, social species may be more resilient to social isolation than we think. For example, Wang et al.’s finding that group-raised bees maintained relatively preserved behavior, gene expression, and brain structure, suggests that even a low level of social interaction (compared to none) can be sufficient to keep development “on track.” This study in bees, and others on social species allow us to better understand these neurobiological mechanisms of development at a level of detail not possible in human research subjects. Findings from studies like Wang et al.’s will inform research related to future interventions in humans. With continued work in this field, there is hope for beginning to combat the detrimental effects of social isolation within our society.

“Before this project, I had never worked with bees before,” Wang shared with us. “I learned firsthand how powerful the bumblebee system is for studies on the mechanisms of social behaviors. I hope our work opens up new avenues into the study of what cues and neural mechanisms are important for the expression or maintenance of social behaviors in obligately social animals.” Wang recently started her own lab at the University of Washington and plans to continue studying bumblebee social behavior. She explained, “My lab will be extending what we learned in this project into studies that examine what happens at the end of life–when bumblebee workers naturally transition from being cooperative to aggressive with each other. Stay tuned!”

The original article discussed here was published in Current Biology on June 20, 2022. Please follow this link to view the full version.