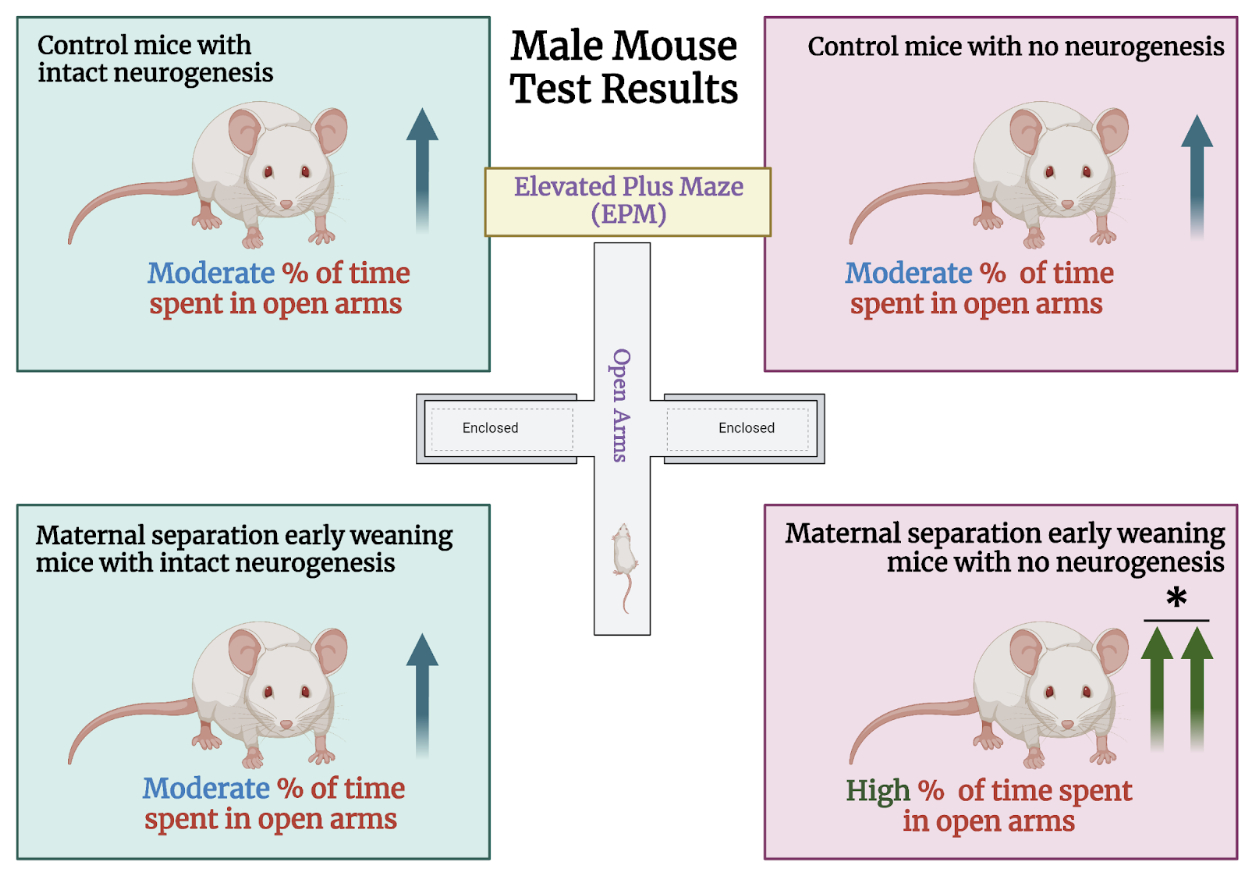 Early life adversity, ranging from physical and emotional abuse, neglect, and violence, to poverty and unstable home environments, can have an enduring toll on child development. Some children who experience early life adversity may experience detrimental effects in the moment but develop into adults without pathological behavior. On the other hand, for certain children, the impacts of early life adversity increase the likelihood that they will develop neuropsychiatric disorders as adults. For instance, anxiety disorders are more prevalent amongst survivors of early life adversity compared to the general population. Although diverse in the symptoms they present and the treatments they require, anxiety disorders share one feature in common: heightened levels of anxiety. Normally, anxiety helps us steer clear of dangers. However, if ramped up into overdrive, excessive levels of anxiety can fuel a range of maladaptive behaviors.

In recent work, graduate student Renée Waters of the Gould Lab at Princeton set out to determine how the effects of early life adversity might lead to dysfunctional behaviors in adulthood. To study this, she utilized a mouse model of early life adversity that involves maternal separation and early weaning. It has previously been shown that mice subjected to this paradigm show increased anxiety-like behavior, similar to maladaptive behaviors observed in humans. In mice, these behaviors are measured as avoidance of social interactions and novel environments. Waters was specifically interested in how adult neurogenesis (the process by which new neurons are born) in a brain region called the ventral hippocampus might play a role in mediating the effects of early life adversity. The ventral hippocampus is one of the only regions of the brain that continually produces new neurons throughout adulthood. This perpetual neurogenesis has been linked to the regulation of avoidance, stress, and various cognitive skills. In particular, adult-born granule cells in the ventral hippocampus are a class of neurons that play an important role in social behavior. Past studies in mice have demonstrated that stress during early development and adolescence can restrict the proliferation of adult born granule cells, potentially disrupting normal behavior. In the present study, Waters and colleagues aimed to replicate these findings with their maternal separation protocol. Further, they hypothesized that the suppression of neurogenesis in the ventral hippocampus following maternal separation could alter the severity of avoidance behaviors.

The researchers relied on two different mouse lines for this study: TK mice and wild-type mice. TK mice express the herpes simplex virus thymidine kinase (TK). Neurogenesis can be inhibited in TK mice using an antiviral drug called valganciclovir (VGCV). In the first phase of the experiment, male and female mice of both groups were randomly divided into two populations: a control group that underwent conventional rearing and a second group that experienced maternal separation and early weaning. Control mice were weaned at 21 days of age, whereas mice in the early life adversity group were weaned three days earlier, on day 17. Before weaning, the early life adversity mice were separated from their mothers daily for 4-8 hours. Once they reached adulthood, half of the mice in each group were administered VGCV in their food, while the other half consumed standard chow. Following six weeks of VGCV treatment, after which neurogenesis was believed to have been largely impeded in TK mice but not wild-type mice, the researchers exposed all groups to an elevated plus maze (EPM). The EPM is an elevated, plus shaped apparatus that contains two arms with high walls (closed arms) and two with no walls (open arms). Mice that are more “anxious” will tend to avoid the exposed open arms and spend more time in the “safe” closed arms. Thus, this test serves as a means to measure avoidance behavior by calculating the length of time spent in each arm.

First, they examined male mice from all eight experimental groups. The findings proved striking: both TK and wild-type male mice that experienced early life adversity as well as control mice that were not administered VGCV (i.e. they had preserved neurogenesis) exhibited virtually indistinguishable EPM behavior. These findings run counter to the researchers’ hypothesis that maternal separation and early weaning would induce a pronounced increase in avoidance behaviors compared to standard reared mice. Despite these findings, maternal separation did have effects on the behavior of male mice that experienced maternal separation and also received VGCV to reduce neurogenesis. These mice spent a greater amount of time in the open arms relative to the other groups. These findings demonstrate that the suppression of neurogenesis in the ventral hippocampus increases exploratory behavior rather than reducing it by promoting avoidance. Female mice from all experimental groups were also exposed to the EPM. However, unlike their male counterparts, they did not show differences in EPM behavior, regardless of the treatments they received. These results highlight the importance of studying sex as a biological variable.

Next, the researchers conducted a social interaction test to gauge the effects of inhibited neurogenesis on social memory and discrimination in male mice. In this test, an experimental mouse is placed in an arena that contains an unfamiliar mouse. Experimenters quantify the number of sniffs made by the test mouse toward the unfamiliar mouse over five minutes. After five minutes, a familiar mouse replaces the unfamiliar mouse and the time the test mouse sniffs the familiar mouse is quantified. Sniffing duration serves as a reliable proxy for social memory in mice, as they typically spend more time investigating novel mice as opposed to those already familiar to them. A large difference in sniffing time between the first (novel) and second (familiar) trial indicates greater social memory and a small difference indicates poor social memory. In accordance with the behavioral findings from the EPM, TK male mice with suppressed neurogenesis investigated both stimulus mice for comparable periods of time, regardless of rearing condition. This was not the case for wild-type mice of either rearing condition. This result suggests that early life adversity alone does not exert significant influence on social memory in male mice. Rather, the suppression of neurogenesis compromises social memory irrespective of a history of early life adversity.

As previous studies using mouse models of early life adversity established that maternal separation and early weaning would promote avoidance behaviors, the finding that such behavioral outcomes were not seen in this study struck Waters and colleagues as surprising. They attributed these differences to the fact that prior studies used different strains of mice–such as C57 mice–than the CD1 mice used here. Indeed, behavioral differences in response to stress have been shown to be related to mice’s underlying genetic makeup. In addition to genetic variation among strains, differences in maternal care might also also play a role in any observed stress response differences. For example, studies have shown that when mothers are reunited with their pups after maternal separation, some strains, including CD1, treat their pups with greater care (increased licking, grooming, nest building, and nursing)., This phenomenon could explain why scant avoidance behaviors were observed among CD1 mice that experienced maternal separation: perhaps maternal care overrode the negative consequences of separation.

These conjectures mirror possibilities seen in humans. Just as certain strains of mice appear to be differentially susceptible to maternal separation and early weaning, humans also vary in the types of maladaptive behaviors they may develop after early life adversity. Indeed, although human studies have shown that early life adversity can increase the likelihood that individuals develop anxiety later in life, certain individuals progress into adulthood with scarcely any indications of maladaptive behaviors and may even develop resilience to future stressors. Taken together, the intriguing findings from Waters et al.’s study, although not entirely anticipated, emphasize the complex interplay between one’s environment and the influence of genetics in regulating the effects of stress on future behavioral patterns.

Waters remarked on the surprising findings of her study, noting that they stood in stark contrast to expectations informed by pre-existing literature in the field: “We began to think of these results in the context of the large variability in neuropathology outcomes seen across humans who experience early life adversity.”

“This variability can be caused by differences in the stressor itself like timing, duration, and intensity but it can also be due to inherent genetic differences which were something of interest here. In different strains of mice, the behavior manifestation of early life adversity seemed to be different. So following this study we have since spent a lot of time investigating different strains of mice in the context of different early life adversity experiences to try to investigate and explain some of the variability in the ways that early life adversity manifests in rodent models,” wrote Waters in an email to Princeton Insights.

According to Waters, “[n]o specific external resources made this work possible other than support and funding from my advisor Liz Gould and lab mates.”

The original article discussed here was published in Neurobiology of Stress in March 2022 . Please follow this link to view the full version.