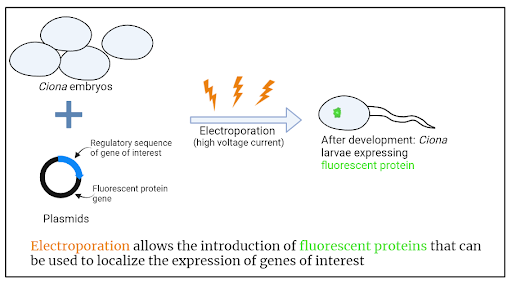 Clinging to the side of a marina you might find the usual suspects like mussels and barnacles, but lurking among these life forms is a less familiar one, a squishy invertebrate that looks like nothing more than a translucent tube. This creature is the sea squirt, Ciona instestinalis. Despite its unassuming appearance, Ciona could hold the key to understanding how the brain--the most complex structure in the universe--came to be. By investigating the evolutionary origin of the brain, we can uncover the roots of the remarkable variety of intelligence in the animal world and gain a deeper appreciation for the beautifully complex human brain. Princeton researchers are now studying the simple ‘brain’ of the sea squirt to begin to unravel this evolutionary story.

So how does a small tube-like animal that finds itself permanently attached to a marina tell us anything about the evolutionary origins of the brain? The answer lies in a fleeting part of the life cycle: its larval form. Ciona larvae are known as tadpoles and look quite like the tadpoles we are used to seeing. In fact, these similarities are more than superficial. Ciona tadpoles possess a set of cells along the dorsal midline, known as the notochord. This structure is also found in frog tadpoles, developing human embryos, and a whole host of animals known as chordates, which includes all vertebrates. The discovery of this free-swimming larval form gave the first hints that Ciona and other similar organisms are closely related to vertebrates. Further research using genetic data confirmed that these animals, known as Urochordates, form the sister group to all other Chordates, including vertebrates. It is this shared ancestry that is the first reason for the interest in Ciona: by understanding traits that are common to or differ between vertebrates and their close relatives, we can begin to piece together evolutionary history. This line of research can identify traits and structures that might have been found in the ancestor of all chordates as well as those that are evolutionary innovations unique to vertebrates. Ciona is not only useful to study because it is a stand-in for the proto-vertebrate; the Ciona 'brain' or sensory vesicle is made of only 215 neural cells, making it possible to zoom in on the developmental trajectory of every one of these cells--a developmental biologist’s dream.

In many animals, a region of the brain known as the hypothalamus is important for innate behaviors like thermoregulation and sleep. Studying cells in Ciona that are similar to vertebrate hypothalamus cells can unlock the secrets of this basic building block of the brain. Previous work has shown that a population of cells in the Ciona sensory vesicle called coronet cells share similarities with certain neurons in the vertebrate hypothalamus that use dopamine as a neurotransmitter, making the coronet cells a candidate proto-hypothalamus. Coronet cells also secrete non-dopamine compounds, making it possible that the development of a complex hypothalamus in vertebrates was the result of subfunctionalization of coronet cells--different populations of coronet cells taking on different functions over evolutionary time. An alternative hypothesis is that the hypothalamus developed from an already complex proto-hypothalamus that consisted of more cell types than just coronet cells. Therefore, the puzzle facing researchers is whether the Ciona brain, and consequently the proto-vertebrate brain, derived from an ancestor with many types of cells or if this differentiation of cell types occurred after the evolution of vertebrates.

To address this question, postdoctoral scholar Laurence Lemaire and colleagues in the Levine lab at Princeton built on work by Chen Cao and colleagues (also from the Levine lab) that mapped out gene expression, or the transcriptome, of Ciona across their developmental timeline. Using an approach known as t-distributed stochastic neighbor embedding (tSNE), the authors were able to identify clusters of cells that had similar gene expression profiles, thus identifying unique cell populations. In their recent work, Lemaire and colleagues focused specifically on the sensory vesicle, and used these data to select genes that showed cell type-specific expression. Yet again, Ciona’s relative simplicity came in handy. While complex organism gene expression is often regulated by genetic sequences far from the gene itself, Ciona's genome usually has regulatory sequences just upstream of the gene. This allows the researchers to examine the expression of specific genes. To do this they created plasmids containing the regulatory sequence for the gene of interest as well as the coding sequence for a fluorescent protein. If the gene of interest is switched on in a cell, the fluorescent proteins would also be expressed, so the researchers could locate exactly where in the sensory vesicle these cells are. To get this DNA into the cells, they used electroporation. During electroporation, developing Ciona embryos are subjected to high voltage electricity which causes the cell membrane to become porous. This porous membrane allows the plasmids to enter each cell, where they can recombine with endogenous DNA and go on to be expressed as the embryo develops.

Altogether, the researchers mapped 15 types of cells, including coronet cells. Mapping revealed that there are several types of neurons associated with coronet cells, including switch neurons which have mechanosensory properties. This mapping left Lemaire and colleagues with two big questions about the cells in this coronet-associated circuit: (1) are these cells related to those in the vertebrate hypothalamus and (2) what is their function?

To address the first of these questions, they turned to another model organism: the mouse. By comparing the expression of genes in the mouse hypothalamus with the expression of the 15 neural cell types they identified, the researchers found evidence that these cells in Ciona share an evolutionary origin with those cells of the mouse. Specifically, they identified homologies (or similarities) between these neurons and those of various subregions in  the mouse hypothalamus. These findings suggest that the Ciona proto-hypothalamus is made of multiple cell types, not just coronet cells. Therefore, the proto-vertebrate hypothalamus is likely to have consisted of multiple cell types. Thus, a complex hypothalamus must have originated before the evolution of vertebrates; or as the title of the paper says, the hypothalamus predated the origin of vertebrates.

As for the role of the proto-hypothalamic circuit, Lemaire and colleagues turned to the original description and gene expression of Ciona coronet cells. Ciona coronet cells were first thought to be part of the hypothalamus based on their similarity with the coronet cells found in the saccus vasculosus (part of the hypothalamus) of fish, which is involved in sensing the changing length of the day by the expression of melanopsin. Further, not only do Ciona coronet cells express melanopsin, they also express another light-sensing protein, pinopsin. With information about coronet cells’ expression of light-sensing proteins, Lemaire and colleagues propose that this coronet-associated circuit is involved in a critical part of the Ciona life-cycle--the onset of metamorphosis. At twilight, Ciona larvae dive away from shallow waters into deeper areas, where they latch on to a surface and undergo developmental change. This is where the researchers suggest that the coronet cells and associated neurons might come into play.

How would this work? The researchers hypothesize that as twilight approaches, pinopsin and melanopsin activation allows the tadpole to sense this change. Next, coronet-associated neurons, including switch neurons, pass the stimulus on to the motor ganglion, which is responsible for controlling the beating of the tadpole’s tail. The resulting change in swimming is all that is needed for this final act of the tadpole, before it metamorphoses into an adult Ciona. Future work on Ciona behaviour and metamorphosis could shed light on whether this hypothesized sequence of events actually occurs.

This study is a remarkable advance in understanding the origin of the vertebrate brain. This work brings together high-throughput genetic techniques with developmental biology to trace cell lineages in the simple brain of a proto-chordate, giving insights into the deep evolutionary roots of the hypothalamus. Moreover, the researchers propose a fascinating hypothesis for the role of the Ciona proto-hypothalamus in setting the stage for metamorphosis. By uncovering the evolutionary history of the hypothalamus and this potential twilight phenomenon, researchers have made an important step toward understanding the dawn of the vertebrate brain.

This original article was published in Science Advances on April 28, 2021. Please follow this link to view the full version.