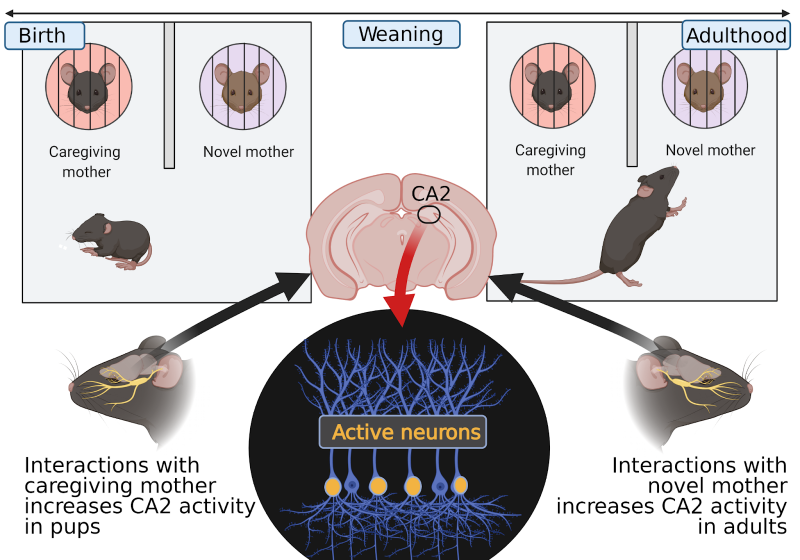 In order to investigate whether newborn mice form and maintain early postnatal memories of their mothers, a team led by graduate student Blake Laham conducted a series of behavioral tests. First, they performed a two-choice social test with newborn mice. In this experiment, a pup’s caregiving mother and a novel mother (a mother unrelated and unfamiliar to the young mouse) were each placed at opposite ends of a testing box in identical wire mesh containers. Subsequently, the pup was placed at the center of the box and the researchers observed which side of the box the pup showed a preference for. This procedure was performed at several postnatal time points (P3, P6, P10, P12, and P14). At three days of age (P3), mice begin to display olfactory-associated memories1, making this an ideal age to begin behavioral testing. Laham et al. found that mouse pups overwhelmingly demonstrated a preference for their caregiving mother—the mother that births and cares for the pups until weaning occurs at P21—as opposed to the novel mother. In the case of P3-P12 pups—whose ear flaps and eyes incrementally open only later in development—this preference was revealed through two distinct behavioral responses: selective nose orientation and a greater frequency of calls (ultrasonic vocalizations) directed toward the caregiving mother. P14 mice, on the other hand, are able to navigate and interact with their environments, so their behavioral responses were measured by the extent of their sniffing within one inch of the mesh wire containers that each of the mother mice were enclosed in. The researchers’ findings suggest that newborn mouse pups not only prefer their caregiving mothers, but have some form of memory of their caregiving mother that allows them to distinguish her from other mouse mothers and exhibit this preference.

By employing an object-preference task similar to the social choice task, Laham et al. confirmed that newborn pups did not prefer their caregiving mothers simply due to their familiarity. In this experiment, newborn mice did not show a preference for either a familiar object or a novel object. These results indicate that pups don’t exhibit a generalized familiarity preference, but rather a specific social preference for their caregiving mothers, possibly due to the significant role they have on pups’ early postnatal development.

As we age, we cultivate connections with those outside of our immediate families. This evolution in the range of our sociability appears to generalize to mice as well, according to additional findings unveiled by the Gould study. Adult mice—those aged 30, 60, 100, and 150 days into the postnatal period—were put through a social preference task similar to that performed on newborn mice in which they were placed in two distinct environments for five minutes each: one with their caregiving mother and the other with a novel mother. Of note, adult mice had not been in contact with their caregiving mother since weaning at 21 days of age. In contrast to their younger counterparts, adult mice overwhelmingly gravitated toward the novel mother. Interestingly, in the object-preference task adult mice were found to prefer novel objects at postnatal day 60, indicating that adult mice have a novelty preference for both social stimuli (other mice) and objects. Therefore, adult mice not only demonstrate a general novelty preference, but their social novelty preference suggests that the early memories they formed of their caregiving mother were maintained over a sustained period of time, allowing them to distinguish between the two mothers and determine which was familiar and which was novel.

After demonstrating that newborn mouse pups appear to remember their mothers as early as three days of age, Laham and colleagues were interested in determining the precise regions of the mouse brain that might be responsible for the formation and maintenance of such social memories. Previous findings have implicated the CA2 region of the hippocampus in forming and maintaining adult social memory2, so the researchers hypothesized that this region may also be involved in newborn maternal memories. To test this hypothesis, Laham et al. measured the expression levels of two immediate-early genes (IEGs), Zif268+ and c-Fos, in the CA2 of P14 pups that were exposed to either their caregiving mother or a novel mother. IEGs are a class of genes that become rapidly and transiently expressed in response to cellular activation and thus are often used as proxies for neural activity3. These experiments revealed heightened IEG expression in newborn mice that had interacted with their caregiving mother as opposed to those that had interacted with a novel mother. Taken together, these findings suggest that the hippocampal CA2 region subserves a neural substrate that maintains social memories from an early age in mice.

During these experiments, the researchers also examined the levels of molecular markers indicative of a mature CA2. They found that at just three days old, the CA2 region did not exhibit the majority of these distinctive markers, indicating that the CA2 region of the hippocampus is not yet fully developed at P3. This result supports the idea that the complete development of this region isn’t necessary to form the kinds of social memories that define a mouse’s early environment. On the other hand, adult mice had higher IEG expression following encounters with novel mothers in comparison to those with their caregiving mothers, a trend opposite to that observed in pups but supportive of their preference for novel mothers.

In order to demonstrate whether the CA2 region of the hippocampus is causally involved in social memory in newborn mice, Laham et al. examined whether such memory is disrupted following inactivation of neural activity in the CA2. To do this, they took a chemogenetic approach and utilized an inhibitory DREADD (designer receptor exclusively activated by designer drug), which allows researchers to selectively inhibit a certain population of cells in the brain only in the presence of a molecule known as clozapine-N-oxide (CNO)4. The authors were thus able to determine whether early social memories are still formed even after temporary inhibition of neural activity in the CA2. Laham et al. injected this DREADD into the CA2 region of the hippocampus and administered CNO prior to a two-choice social test similar to that performed previously. These experiments corroborated the investigators’ hypothesis that the CA2 is critical for both the social memory in both early life and adulthood: newborn mice injected with a DREADD and administered CNO no longer demonstrated a preference for their caregiving mothers, whereas adult mice in the same condition no longer preferred the novel mother. In short, the DREADD inhibition of the CA2 eliminated the ability of both newborn and adult mice to differentiate between the novel mother and the caregiving mother, providing evidence that social memory formation was significantly disrupted. These results highlight the importance of the CA2 subregion of the hippocampus in maintaining and preserving newborn social memories despite its relative immaturity at that age.

It turns out that newborn mice, like humans, are capable of remembering and distinguishing the different figures in their lives. Laham et al.'s findings underscore the early nature and persistence of CA2-dependent social memories in mice have paved the way toward an understanding of the CA2’s role in integrating social information to inform appropriate behavioral responses during all stages of life. This ability likely plays an integral role in rodents’ socialization, just as it does for our ability to sustain meaningful relationships in our own lives.

This original article was published in Cell Reports on January 26, 2021. Please follow this link to view the full version.