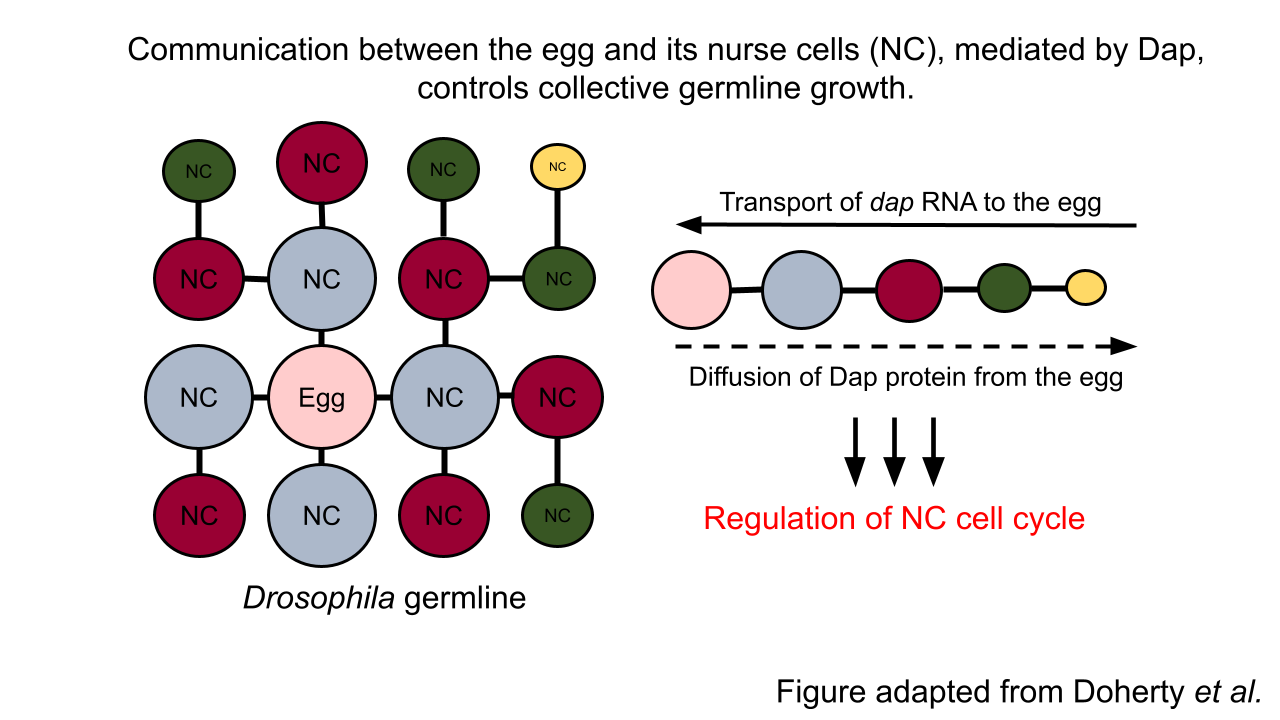 How do animals produce a healthy egg cell? To answer this, many developmental biologists investigate the complex choreography of factors required for successful egg cell development, called oogenesis. This process is crucial to the survival and reproduction of many vertebrate and invertebrate species and, remarkably, diverse species often employ a common strategy where the growth of the egg cell is supported by an interconnected network of germline, or reproductive, cells. Like cellular factories, the job of the germline cells is to produce and export nutrients to the egg via connecting cytoplasmic canals. The nutrients these support cells supply to the egg include proteins and the nucleic acids that code for them, called RNA transcripts.

In the insect model system Drosophila, precisely 15 germline cells, called “nurse cells,” are critical for the development of a single egg. Recent work led by Princeton graduate student Caroline Doherty and colleagues in the Shvartsman and Gavis labs revealed a sophisticated feedback mechanism between the egg and its nurse cells. The egg, surprisingly, actively controls the growth of its nurse cells, which in turn regulate the egg’s own development. This research is the first evidence of cell-cell communication between the egg and its supporting cells in the Drosophila model system.

In a cell cycle, cells alternate between periods of growth, DNA replication, and cell division. By contrast, nurse cells undergo growth and DNA replication, but bypass the cell division phase. This enables these specialized germline cells to grow, increase in volume, and accumulate extra copies of DNA to enhance protein and RNA output to the benefit of the egg. Curiously, nurse cells vary in size and DNA content—but always in a consistent pattern. Specifically, the closer a nurse cell is to the egg, the bigger it is. In this work, Doherty et al. discovered that, like cell size, nurse cells closer to the egg also have more DNA. However, the mechanism underpinning this spatial hierarchy was unclear. Their hypothesis was that variations in cell cycle regulation could underlie the hierarchy in cell size and DNA content. Indeed, the researchers observed that the cell cycles of nurse cells, that are of equal distance from egg (and of equal size), are synchronized. This finding prompted the researchers to investigate the signaling factors that could regulate the timing of nurse cell growth and DNA replication in a spatial-dependent manner.

Here, they discovered a bidirectional communication system between the egg and its nurse cells. In this case, the key signal is a growth-promoting cell cycle regulator called Dap. Specifically, RNA transcripts encoding Dap are synthesized by the nurse cells and then transported to the egg. Once localized to the egg, the egg’s machinery translates the RNA to produce Dap protein, which then diffuses back to the nurse cells to control the timing of their cell cycle. Dap accomplishes this task by counteracting the activity of the DNA replication-promoting regulator called CycE. Thus, the diffusion of Dap protein, originating from the egg, establishes the nurse cell hierarchy.

To further probe how dynamic cell cycle synchronization arises in the germline, Doherty et al. leveraged a computational modeling approach. They demonstrated that the cell cycle is like an oscillator whose behavior arises from the interaction between two parameters: one, CycE, and two, inhibitors of CycE other than Dap (Dap is not the only negative regulator of CycE).  Importantly, they showed that the cell cycle oscillations of nurse cells are related, or coupled, to one another via the transported dap RNA and the diffusible Dap protein. Therefore, their work confirmed that the availability of Dap is sufficient to explain the synchronization of cell cycles, implicating a direct role for the egg cell in collective germline growth.

Beyond Drosophila, the findings by Doherty et al. fit within a larger model of oogenesis. For example, in the mammalian ovary, development of the egg is supported by surrounding granulosa cells whose growth, like the case of the Drosophila nurse cells, are regulated by bidirectional cell-cell communication with the egg. Interestingly, the physical structure of the mammalian germline, and the number and type of connections between the egg and its supporting cells are considerably different from Drosophila. However, given the similarities in regulatory logic between insect and mammalian oogenesis, the mathematical framework developed in this work to describe coordinated nurse cell growth could, for instance, serve as a foundation to probe the relationship between germline structure and synchronized cell growth. More broadly, the tools developed here could enable identification of principles governing egg cell development in mammals and other highly diverse and complex systems.

This original article was published in Developmental Cell on March 8, 2021. Please follow this link to view the full version.