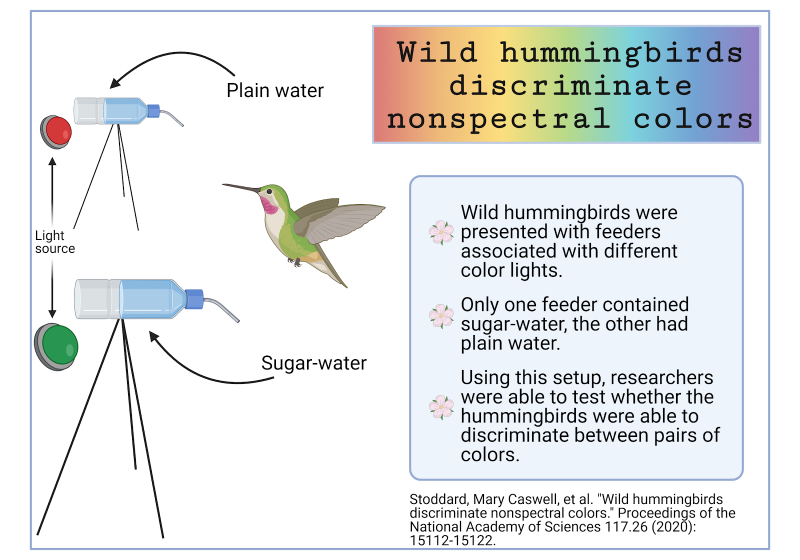 Who is the funkiest musician of all time, and why is it Prince? And what does this have to do with hummingbirds?

Central to Prince’s aesthetic was his tasteful use of purple, so much so that Pantone Color Institute released a shade of purple in his honor. Prince was on to something. Purple is not just the color of royalty, but it is also unique among the colors we can see--it is nonspectral.

Humans have three types of light-sensitive cells in the retina (cone cells) that we use for color perception. These cells are roughly sensitive to red, green, and blue light. Color itself is a psychophysical property, not just a physical property of light. This means that color is realized in the brain after light has been received by our retinas. From what we know about human color perception, we distinguish colors from one another by comparing the stimulation of each of the cone cells. Red, for example, is the result of high stimulation of the red-sensitive cones and low stimulation of the green- and blue- sensitive cones. Seeing orange is due to stimulation of both the red and green cones. These colors are known as spectral colors and can be evoked by a single wavelength of light in the visible spectrum. If, however, the cones that sense very different parts of the light spectrum--the red (sensitive to the longest wavelengths) and blue cones (sensitive to the shortest wavelengths)--are stimulated, a whole new experience arises: purple. In other words, perception of the color purple is due to the stimulation of nonadjacent cones produced by mixing wavelengths at either end of the spectrum, making it nonspectral. Purple is different from spectral colours because it is not part of the rainbow--no single wavelength of light is purple. Prince wasn’t just fabulous, he was nonspectrally fabulous.

Birds are tetrachromatic: they have a fourth type of cone that senses the violet/ultraviolet part of the light spectrum. What this means is that birds can see a whole range of colors that we cannot, such as a mix of UV and blue. Another consequence of tetrachromacy is that there are a number of other nonspectral colors birds might be able to see, such as UV+green, UV+red, UV+yellow and UV+purple.

To test whether birds actually see these colors, a team led by Princeton Professor Mary Caswell Stoddard and postdoctoral scholar Benedict Hogan went to the Rocky Mountain Biological Laboratory in Gothic, Colorado. There, the researchers conducted a series of color vision experiments in wild hummingbirds. As anyone with a bird feeder knows, hummingbirds are crazy for sugar-water. Taking advantage of this, Stoddard, Hogan and their colleagues presented hummingbirds with feeders that contained either a sugary reward or plain water. Each feeder was paired with an LED light tube capable of producing bird-visible colors, so that one color was associated with a reward and the other was not. If the birds were able to reliably find the reward, that would suggest that they can tell the difference between the pairs of colors. As they expected, hummingbirds could tell the difference between spectral colors like red and green. To confirm that the birds weren’t using smell or other visual cues to tell the difference between the plain water and sugar-water, the researchers tested whether the birds could reliably find the reward when both feeders were associated with the same color LED light tubes. In this condition, the hummingbirds weren’t able to consistently find the reward. This confirmed that hummingbirds were indeed relying on color.

But is this ability to discriminate nonspectral colors relevant to the world that hummingbirds inhabit? To test this, Stoddard and her team examined the colors of 965 bird plumage patches and more than 2000 plant colors. They found that approximately 30% of the bird colors and 35% of the plant colors they studied are likely to be perceived by birds as nonspectral. Hummingbirds, therefore, are probably navigating a landscape that is full of nonspectral colors, and the ability to discriminate between them might be vital to survival.

Like Prince, hummingbirds are nonspectrally fabulous, and they know it.

“Watching the hummingbirds easily discriminate between two colors—like UV+red and red—that looked identical to us was thrilling,” Stoddard said. “We suspect that many bird species can perceive this ‘extra dimension’ of color vision, but there is much more work to be done.”

This original article was published in PNAS on June 30th, 2020. Please follow this link to view the full version.