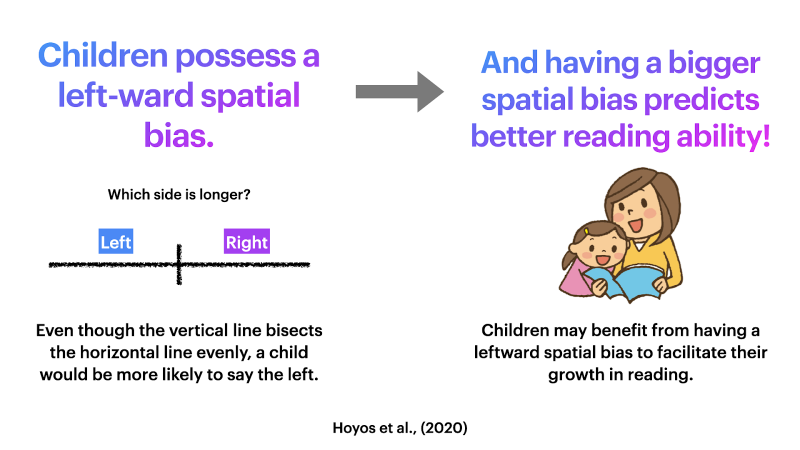 How good are you at finding Waldo? Whether you’re good or bad at it, finding Waldo is not a trivial task. To do so, you must be able to direct your attention to a specific location in a scene, process a massive amount of noisy input, and, finally, make sense of it. Tasks that you perform in your everyday life like reading, driving, cooking--and yes, finding Waldo--all depend on your ability to direct your visuo-spatial attention, the attentional mechanism that allows you to select information from a specific location in space for processing, as well as filter out irrelevant information from other locations.

Previous studies surrounding visuo-spatial attention have determined that individuals can possess biases towards the right or left visual hemifield. In other words, a person who is more right biased is better able to focus on the right side of space and a person who has a left biased is better able to focus on the left side of space. These biases can be assessed using a line bisection task, where participants are shown lines and are asked to mark up where they think the center of the line is. However, it is important to note that tasks like this do, to some extent, distill the essential elements of a more "natural" task like locating Waldo, and it can potentially leave out the more complex structure of natural scenes.

Despite the abundance of visuo-spatial attention research, the majority of participants that have been tested are adults. As a result, it is unclear how these biases develop, especially in young individuals. Insight into this topic could provide a deeper understanding of how children process visuo-spatial information. To directly fill in this gap, graduate students Patricia Hoyos and Na Yeon Kim, along with their colleagues of the Kastner Lab at the Princeton Neuroscience Institute conducted a study to illuminate the ways in which children’s visuo-spatial attention functions in comparison to adults’.

In Experiment 1, Hoyos and colleagues sought out to explore the development of spatial biases. They recruited 397 participants, most of which were children in first through eighth grade (n=336) and college freshmen at Princeton University (n=61). They collected information about age, gender, and handedness (i.e., right-, left-handedness, or ambidextrousness) from all the participants. Participants were asked to complete a virtual line bisect assessment, similar to past studies. They were presented horizontal lines of varying length, bisected by a single vertical line, as shown in Figure 1, and were then asked to select which line section appeared shorter or longer by pressing keys on their keyboard.

In Experiment 2, the researchers wanted to test the hypothesis that possible spatial biases could be related to reading ability in children. To test this, they recruited 123 children in first through third grade who completed both the virtual line bisection assessment and the Rapid Automatized Naming (RAN) Test. The RAN test is utilized as an index of reading ability. This RAN test assessed the speed at which participants could read out loud stimuli from left to right (e.g., letter and color names), serving as a measure of reading ability. To do this, participants were shown a card that included 50 stimuli spread evenly across 5 rows (i.e., 10 stimuli per row) and were then asked to name the stimuli shown as fast as they could.

The authors found that in Experiment 1, children demonstrated a stronger leftward spatial bias than adults and that the adults’ spatial bias was numerically closer to zero. This result was found regardless of handedness--whether they were left- or right-handed, or ambidextrous, participants exhibited a similar leftward spatial bias. In examining the development of this bias, Hoyos et al. found that this effect diminished over time, meaning that younger children demonstrated a stronger leftward spatial bias compared to older children. Why might this be the case? The authors proposed learning to read left-to-right languages as a possible answer. In fact, in Experiment 2, children’s early spatial biases actually predicted their performance on the RAN test and early reading abilities, where larger spatial biases predicted better reading abilities. This suggests that the leftward spatial bias can be attributed to early childhood development when children are learning how to read (in this case, English) from left to right. Being in the early stages of learning to read in this direction may have created a preference for the left visual hemifield.

Hoyos et al.’s study provides incredible insight into the way children process visual information. The researchers determined that children indeed have a strong left hemifield bias in their visuo-spatial attention, potentially due to learning to read from left to right at a young age, which would ultimately place more work on the right hemisphere of the brain to process the resulting information. However, research has shown that children with dyslexia or with untreated ADHD experience less of a left visuo-spatial bias and more of a right visuo-spatial bias. This experiment, along with previous studies, underscores the importance of understanding the interaction between visuo-spatial biases and reading acquisition, which has the potential to explain the various trajectories of children’s reading growth. There remains much to learn about the development of children’s visuo-spatial attention, but this study demonstrates one important step in documenting this process and the potential ways it could play out for children overall.

“The community of Princeton was instrumental to this research”, Hoyos said. “Children from the Princeton area, particularly those at the Princeton Charter School and Liberty Lake Day Camp graciously donated their time to science.” In terms of future research, Hoyos and colleagues are “currently collaborating on a project that examines how spatial biases develop for children learning to read a right-to-left language like Hebrew. We have also collected brain imaging scans from a cohort of children along with their spatial biases to understand how the developmental trajectory of spatial biases is linked with changes in the brain".

This original article was published in Developmental Science on October 22, 2020. Please follow this link to view the full version.