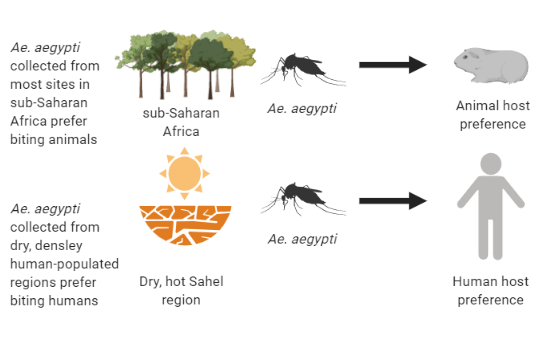 A recent study led by postdoctoral scholar Noah Rose from the McBride Lab at Princeton addressed these questions by examining the mosquito species Aedes aegypti. The subspecies Ae. aegypti aegypti is globally invasive, prefers biting humans, and is a major disease vector. However, the subspecies Ae. aegypti formosus has remained a generalist in at least a few of the East African locations where it has previously been characterized. The divergent host preferences of Ae. aegypti populations native to sub-Saharan Africa can provide clues about what environmental factors drive the evolution of human specialization in mosquitoes.

To examine how Ae. aegypti may have evolved to prefer humans, Rose et al. studied variations in human-preference of Ae. aegypti across sub-Saharan Africa. They set up 27 collection sites across the region, which represented a range of different climates and included human population densities ranging from very sparsely populated up to very densely populated (2000 people per km2).

Mosquito eggs were collected using “ovitraps” and brought to a lab for behavioral human-preference tests after the eggs hatched. The ovitraps consisted of plastic containers containing damp seed germination paper covered in 3-8 cm of water. Female mosquitoes would lay their eggs on the water’s surface and the researchers would allow the water to slowly evaporate over the course of a day. The researchers could then transport the eggs back to their lab in Princeton, where the eggs would be hatched into mature mosquitoes. Male and female mosquitoes that originated from the same collection site could mate freely with each other, forming colonies to be used for behavior experiments.

A preference index was calculated for mosquitoes collected from a particular location using an experimental setup that allowed female mosquitoes to choose between biting a human or an animal. In this setup, a human volunteer stuck his or her forearm in the hole of a chamber, which contained a mosquito colony from one of the 27 collection locations. Another hole in the chamber led to a small animal. Researchers then observed the fraction of female mosquitoes within a colony that bit either the human volunteer or the animal.

The preference indices varied widely between different mosquito colonies, but luckily for the human volunteer, most of the mosquito species displayed little preference or had a slight preference for the guinea pig or quail. However, mosquitoes from three West African collection sites displayed particularly high preferences for biting the human volunteers.  These collection sites are in the Sahel ecoclimatic zone, which experiences a very short rainy season and is dry for 9 months at a time, including during the hottest part of the year.

Linear modeling combining the mosquito preference indices and ecological data from the collection sites helped to quantitatively explain variations in human preference. This model revealed that 65% of variation in human preference correlated with intensity of dry seasons, and an additional 18% of the variation could be explained by human population density.

With an understanding that the intense dry seasons of the Sahel region likely drive human-preference in mosquitoes, Rose et al. then proceeded to study the ancestry of human-preference by comparing their collected African Ae. aegypti to the human-specialist Ae. aegypti aegypti. This globally invasive subspecies can be recognized by white scaling on the abdomens of female mosquitoes. The African mosquitoes collected by Rose et al. had varying degrees of scaling, which was strongly correlated with a preference for humans. That is, the African mosquitoes with a stronger preference for humans were also more morphologically similar to the globally invasive subspecies, suggesting a shared ancestry between them.

To further explore the potential ancestral relationships between African mosquitoes and the human specialist found across the world, the whole genomes of 366 distinct mosquito genomes were sequenced. Genomic DNA was extracted from about 15 individuals per site for 24 out of the 27 sub-Saharan collection sites in this study. In addition, the genomes were sequenced for mosquitoes collected from Asia, South America, and a known human-biting variety found in Rabai, Kenya.

Analysis of genome sequences revealed that many of the mosquitoes collected across sub-Saharan Africa showed some level of ancestry with Ae. aegypti aegypti, but that the mosquitoes from the Sahel region that displayed the strongest preference for humans also shared more ancestry with the globally invasive sub-species.

The authors of this study proposed two potential explanations for the shared ancestry between human-preferring African and non-African mosquitoes. Either the mosquitoes shared a common human-preferring ancestor before the sub-species left Africa, or there has been gene flow from Ae. aegypti aegypti returning back to Africa and mixing with local Ae. aegypti populations. Sequence analysis revealed that the human-preferring mosquitoes collected in the Sahel region have genomic clusters similar to each other but distinct from both the globally invasive subspecies and the animal-preferring populations nearby, supporting the former explanation.

The genetic basis for human specialization is likely to involve many genes. This study suggests that genes associated with a preference for human odor may also covary with other genes important for survival in human environments. Furthermore, certain genomic regions contained a higher concentration of human preference-associated genetic markers, indicating that these regions are likely maintained through natural selection despite gene flow.

The results of this study support a conclusion that the dry climate and urban environments found in the Sahel region likely drove selection of human preference in mosquito populations there. These human-preferring mosquitoes then may have seeded the human-specialist populations found elsewhere in the world. Natural selection could continue to drive human specialization in mosquitoes, so it is especially important in dry, urban environments to eliminate opportunities for mosquitoes to breed in human-stored standing water.

Postdoctoral scholar Noah Rose, first author of this study, explained that he’s “currently working to better understand ecological and evolutionary dynamics of human-biting behavior among mosquitoes in the Sahel.” The research team recently established a Sahel mosquito network that includes scientists from Senegal, Mali, Burkina Faso, and Niger. “We’re really excited both to test our model in new locations, and determine the details of the precise forces that drive mosquitoes to specialize in humans,” he explained.

Rose noted that departmental support for undergraduate researchers Nnenna Ibe (Ecology & Evolutionary Biology (EEB) / Program in African Studies) and Eliza Ewing (EEB) “not only helped these undergraduates get involved in primary research, but also substantially broadened the scope of our findings.”

The original article discussed here was published in Current Biology September 21, 2020. Please follow this link to view the full version.