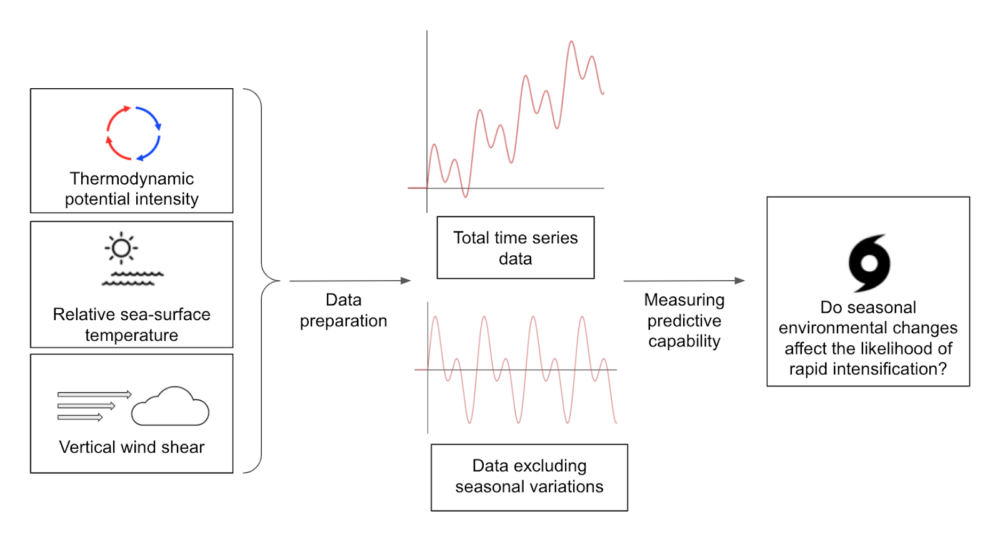 Forecasting the trajectory of tropical cyclones (TC), which are known as hurricanes when they appear in the Atlantic, remains an urgent meteorological challenge. The difficulties in TC prediction were laid bare during 2019’s Hurricane Dorian, a devastating Category 5 storm that swept through the Bahamas and the Southeastern United States. Like many Atlantic storms before it, Dorian underwent the process of rapid intensification (RI), catching scientists off guard with consecutive daily wind strength increases of over 30mph. The effect? Dorian transformed from a Category 2 to Category 5 storm in only two days. The staggering intensification of Atlantic storms raises the following question: what is the science behind these RI events, and how predictable are they?

Recent work by Princeton researchers Ching Ho Justin Ng and Gabriel Vecchi from Princeton’s Atmospheric and Oceanic Sciences (AOS) and Geosciences departments applies rigorous statistical analysis to shed light on the question of RI predictability. Specifically, the authors study whether average environmental conditions in a given hurricane season are effective controls on the statistics of TCs undergoing RI. The focus is therefore on seasonal timescale predictability, which should be contrasted with subseasonal effects: while predictability on a seasonal scale is crucial for scientists and communities to be able to prepare months in advance for serious storms, subseasonal variations are more likely to be storm dependent, and therefore less predictable in advance.

The authors narrow their consideration to hurricanes occurring between 1980 and 2015 in the North Atlantic Basin, a region covering the Gulf of Mexico, the Caribbean Sea, and the North Atlantic. To explore how TC and RI prevalence might vary across the different regions, they first run a clustering algorithm on the geography and intensity of cyclones. This leads to two main groupings that are used in the analysis: the first, which we call cluster 1, consists of cyclones in the Gulf and Western Caribbean; the other, cluster 2, covers the remainder of the North Atlantic.

Ng and Vecchi then conduct statistical tests to capture those environmental variables most correlated with certain target metrics, namely the annual number of RI events, denoted n(RI), and the probability of a TC going through RI, denoted p(RI). Linear and logistic regressions focus attention on three explanatory variables: vertical wind shear (VWS), which measures the variation in wind speed with elevation, potential intensity (PI), a thermodynamic upper bound to the maximum wind speeds, and relative sea-surface temperature (RELSST) between the considered region and the tropical oceans. Physically, the importance of these factors is to be expected: VWS destabilizes strong storms by adding shearing forces, while high PI and RELSST imply that there exist large energy reserves from which the storm can grow.

The physical intuition connecting these variables with rapid intensification events does not answer the question, however, of the timescale over which these variables act as environmental controls. In fact, how this occurs shows surprising regional variation. Drawing from NOAA and NASA cyclone data, the regressions of p(RI) and n(RI) against seasonal mean environmental variables shows strong correlation (to 95% confidence) in cluster 2, especially in the deep tropics region; however, despite occupying a similar latitude, cluster 1 shows no significant correlations. Given that RI events occur at similar frequencies in both clusters (p(RI) of 37% and 49% in cluster 1 and 2 respectively), what could explain the huge variation in RI predictability?

To address this question, the authors consider the variations in VWS and PI, proposing three hypotheses:

The relative influence of climatological, seasonal, and subseasonal variations is studied by decomposing daily time series data into its average contribution from each time scale. Building a distribution of VWS and PI values associated with each scale, the authors are able to apply measures of similarity (e.g. convolutions) with observed RI distributions to address each of the above hypotheses.

This convolution analysis proceeds by alternately including and excluding seasonal data before measuring similarity with RI distributions, and affirms that seasonal variations are the key timescale for cluster 2. When included, the data has a correlation of 0.6 with n(RI); when not, the correlation drops to 0.3. Cluster 1 fails to show a similar effect: with or without seasonal variation, the correlation with n(RI) is less than 0.1. Also supporting the first hypothesis, the authors observe that the negative correlation of VWS and PI is three times stronger in cluster 2 than cluster 1, suggesting the role of cooperative physical mechanisms controlling various environmental parameters. The study of this mechanism, including the question of its varying strength across the Atlantic, is the subject of current work.

A similar application of time series decompositions and convolutional analyses is applied to hypotheses 2 and 3, and affirms components of both. Particularly, cluster 1 is more climatologically favorable for RI events, and experiences larger subseasonal variations. However, quantifying the role of the VWS-PI correlation shows that the presence (or absence) of correlations of environmental statistics still far outweighs in magnitude other observed effects.

Ng and Vecchi’s study is the first to carefully consider the variation in RI seasonal predictability across different cyclone clusters. Their approach allows for the identification of critical correlations and feedback mechanisms that influence RI occurrence, like the VWS-PI correlation that controls RI statistics in cluster 2. A separate study by the authors shows how this negative correlation is well reproduced in climate models predicting sea-surface temperature (SST), supporting the hypothesis that accurate SST prediction allows for better RI prediction in cluster 2. On the other hand, the absence of such mechanisms in cluster 1 renders seasonal predictability difficult, and the authors emphasize the need to forecast on shorter, subseasonal timescales. Given the number of cyclones that violently traverse the Gulf and Western Caribbean annually, this conclusion may appear to be a sobering one. However, the study remains an important step in clarifying the capabilities of forecasting organizations and improving the overall storm preparedness of coastal communities.

In discussing the group’s future projects, Professor Vecchi explained “We are gearing up to test the extent to which these findings can enable seasonal predictions of RI statistics using the real-time forecasts of climate that are generated regularly around the world.” This important work will no doubt rely on the physical insights and statistical frameworks developed by the authors in the present study.

The original article was published in Climate Dynamics on March 28, 2020. The full version may be found here.