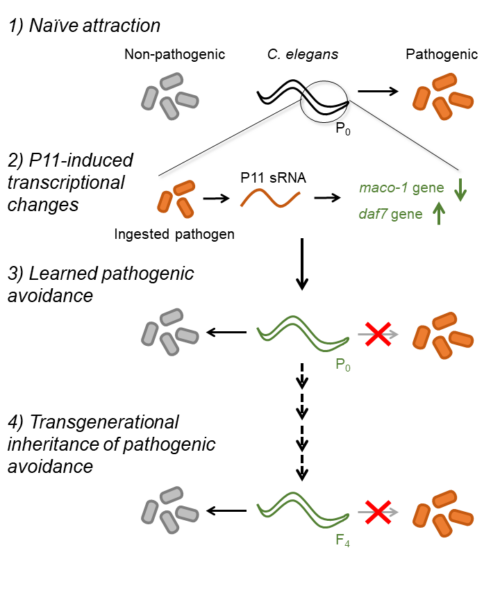 Segments of DNA, called genes, encode the expression of an organism’s traits. Genes are heritable, meaning that they are transmitted from the parent to their progeny. Additionally, scientists have uncovered mechanisms that enable changes in gene function, independent of changes in DNA sequence, that are also heritable. The study of these mechanisms, collectively known as epigenetics, has revealed ways in which the environment shapes our biology in the context of health and disease.

Epigenetics, via its effect on gene expression, influence an organism’s physiological and behavioral response to changes in its environment [1]. However, in the case of social behavior, the specific epigenetic changes that drive certain behaviors, and whether the information encoding behavior is transmitted across generations, is poorly understood.  To tackle these questions, researchers in the Murphy lab at Princeton University previously investigated food preference behavior in the worm, Caenorhabditis elegans (C. elegans) [2]. C. elegans feed on bacterial food sources, including Pseudomonae species. Some species of Pseudomonae are nutritious, whereas others are pathogenic. Consequently, the ability to distinguish between these two sources is imperative to the worms’ survival.  Naïve worms prefer Pseudomonae, including those that make the worms sick. Following exposure to pathogenic Pseudomonae, worms learn to avoid this food source and develop a “memory” of the negative experience. This finding motivated Murphy lab researchers to ask: can this learned pathogenic avoidance behavior be passed on to subsequent generations? Surprisingly, the answer is yes.

To investigate if learned pathogenic avoidance is heritable, Rachel Kaletsky and Rebecca Moore of the Murphy lab team trained worms with either a non-pathogenic strain of Escherichia coli, called OP50, or a pathogenic strain of Pseudomonas aeruginosa, called PA14, by feeding worms either of these bacteria for one day [2]. To determine their preference, the trained worms were tested in an experiment called a choice assay; here, the worms are set between two food sources, the non-pathogenic OP50 versus the pathogenic PA14, and must choose what to eat. As expected, worms trained with OP50 maintained their naïve preference for PA14 and chose PA14, whereas worms trained with PA14 learned to avoid the pathogen and chose OP50.

Next, to determine if the avoidance behavior is exhibited in the following generation, the progeny of the trained worms were tested using the same choice assay. Remarkably, the naïve progeny of worms fed pathogenic PA14, but which were never exposed to or infected by PA14 themselves, also exhibited avoidance behavior and chose to feed on OP50 [2]. Curiously, learned avoidance behavior persists for precisely four generations of offspring before the memory is lost [2].  To put this in perspective, the average lifespan of C. elegans is a few weeks. Therefore, the adaptive avoidance behavior is highly transient. While it is unclear how this generational timescale is set, presumably, loss of the avoidance behavior is an advantageous long-term strategy [2]. After four generations, worms could again encounter nutritious Pseudomonae species, and worms must harbor a renewed attraction to Pseudomonae to benefit from this food source. Thus, their finding, referred to as transgenerational pathogenic avoidance, represents an effective, dynamic, and reversible strategy for worms to protect themselves against pathogens.

In their latest work, Kaletsky, Moore and colleagues were motivated to determine what part of the bacteria communicates to C. elegans to change their behavior for multiple generations [3]. Two clues guided their investigation. First, transgenerational pathogenic avoidance is highly species-specific [2]. That is, C. elegans learn to avoid bacterial pathogens other than PA14, but only following exposure to PA14 is the avoidance behavior transmitted to the next generation. Second, transgenerational pathogenic avoidance is dependent on whether PA14 is pathogenic [2]. Indeed, certain environmental conditions can tune the virulence of PA14. In conditions where PA14 is less virulent, worms do not learn to avoid PA14 and their progeny also fail to avoid it. Together, these findings suggest that the signal that induces pathogenic avoidance in worms must be 1) specific to PA14, and 2) present only under conditions of pathogenicity.

To identify the cue that induces transgenerational pathogen avoidance, Murphy’s group employed the choice assay. In this iteration, they trained worms with non-pathogenic OP50 mixed with various purified biocomponents of PA14. They discovered that transgenerational avoidance behavior was recapitulated when small RNAs (sRNA) were administered to OP50 [3].

PA14 produces many different types of sRNA molecules. To pinpoint the precise sRNA molecule(s) that induce transgenerational inheritance of pathogenic avoidance, Murphy’s group compared sRNAs produced from PA14 grown under non-pathogenic conditions versus PA14 grown under pathogenic conditions. This analysis enabled them to identify a single sRNA called P11. Indeed, exposure to the P11 sRNA is analogous to exposure to pathogenic PA14, or total sRNAs isolated from pathogenic PA14: P11 induces learned pathogenic avoidance in the parent worms, and further, the behavior is transmitted to naïve progeny [3]. The implication of this finding is that C. elegans decipher what bacteria they are eating by “decoding” a bacterially-produced sRNA message.

So, what message does P11 send to C. elegans? The P11 sRNA itself does not make the worms sick. Rather, following ingestion of PA14 by worms, uptake of the P11 sRNA into the intestine, and subsequent processing via the C. elegans germline [1] signals to neurons to prevent the expression of a gene called maco-1 [3]. In turn, downregulation of maco-1 expression enables enhanced expression of another neuronal gene, called daf-7. Upregulation of daf-7 is crucial for transgenerational pathogenic avoidance [2]. Consistent with this, elevated expression of daf-7 is maintained in the progeny of worms exposed to PA14. Thus, P11 directs a neuronal gene expression pattern in worms, which is sustained for four generations of progeny, to drive pathogenic avoidance behavior.

“One of the really surprising findings we came across was that the germline is required not only for passing information to progeny, but also important for maternal learning. This highlights that there are likely additional tissues that are involved in communicating environmental signals to the whole organism to coordinate behavioral changes,” noted Moore, one of the lead co-authors of the study.

Together, this work, led by Kaletsky and Moore, provides mechanistic insight into how C. elegans process cues from the environment to drive a multigenerational change in behavior, with an added nuance: inter-kingdom signaling between bacteria and worms underlies the epigenetic basis for heritable pathogen avoidance. Consequently, naïve progeny of trained parents possess the wherewithal to avoid PA14, enabling them to get a head-start and efficiently seek out nutritious food. The findings made by Murphy’s group suggest other exciting possibilities for future discovery. Perhaps, worms interpret many other bacterially-produced messages (either by PA14 or other bacteria) to drive epigenetic changes in behavior. Beyond worms, PA14 also harbors the capacity to infect humans. Ongoing work focuses on pinpointing whether PA14 signals to mammalian cells, too, using sRNAs to alter mammalian gene expression, representing a novel modality for interactions between a pathogen and its host.

This article was published in Nature in September 2020. Please follow this link to view the full version.

1The germline is comprised of cells that transmit genetic information to progeny i.e. cells that form the eggs.